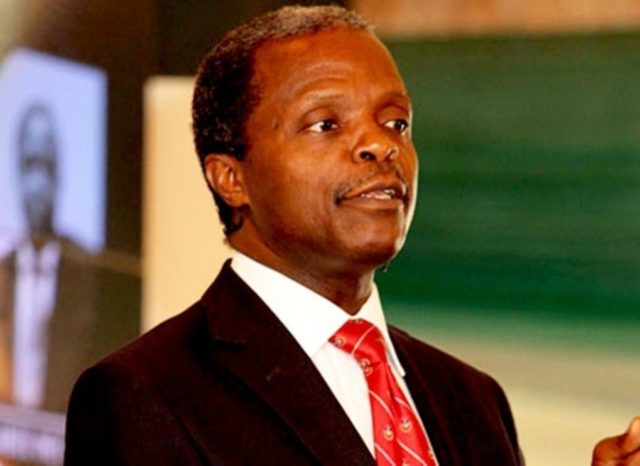 Professor Yemi Osibajo, Nigeria's vice president
Many well meaning people would have been in politics but for the seeming life and death issue that they say politics has become. Politics in many parts of the world's confirms.
Look at the deadly political situation in the United States between the Republicans and the Democrats.        Leaders from some African countries have ended up in the Hague to defend themselves against life and death politics.
​    When some politicians act or talk, observers think they lack education despite their claim to higher education, one of the reasons for seeking to lead their countries.
Imagine a leader with a claim to professorial standing, defender of the rule of law and a Minister of God opening his mouth and referring to the entire population of a political party that he and his party face in opposition as thieves. Does that make all members of that political party thieves as claimed by the desperate politician?
Certainly not. And Psychology - the study of scientific study of the mind and behavior, according to a dictionary definition teaches that stereotyping is wrong and deadly. And Social Psychology defines stereotype as overgeneralized belief about a particular category of people, and stereotypes are generalized because one assume that the stereotype as true for each individual person in the category.
When Professor Yemi Osibajo, Nigeria's vice president, said Nigerians will no longer vote for thieves in one of his recent campaign statement, one was at a loss about whether his reference was to the population of the entire opposition parties, or the entire members of the major opposition party, the People Democratic Party, which the ruling party members are fond of referring to as a party of thieves and with righteous indignation and they are the angels that Nigerians trust.
Observers are saying that If anyone in any political party or outside a political is discovered to have stolen, the right thing to do is allow the rule of law to take its course. Many Nigerians believe it is what the ruling party is supposing to be doing with the fight against corruption, and that the party cannot claim that it has any prove that all members of the opposition party currently campaign for political office are thieves.
Observers ask that If all politicians in the opposition parties are thieves, does the law in Nigeria allow thieves to run for office? They say that If the law in the country does not allow thieves to run for office, it then becomes questionable to hear for any politician to call another politician a thief without a prove to show that the politicians is indeed a thief.
Nigerians want to hear the politicians campaigning with what they intend to do based on their plans to change the sad economic situation in the country. Happily some members of the ruling party have been saying that the party's achievement in the last three years that the party has been in power will ensure president Muhammed Buhari's election. If it is so, why can't the leaders of the party showcase these achievements in their campaign around the country than negatively stigmatizing others and believing that is the way the party can win am election?
Politicians will say that power is transient and still the same politicians behave in ways that seems like they don't understand what they are saying. If the politician understands that power lasts only for a short time and that such a short time is an opportunity to do the little good he or she can do to leave the name in the sand of time, the politician will certainly not be about town behaving like people expected to be in power forever.
Of course, it is clear like daylight that politicians are careless about the consequences of their acts, especially in the Third World countries where election results hardly align with voters's decisions. It is weird to see that many Nigerians abroad are struggling to change the wrong stigmatization of their country and their leaders continue to give the impression that wrong stigmatization is the correct way to convince people to vote for them.
It is a new rule that no politician is a thief when Nigerian politicians find themselves together in the ruling party, but the moment a politician leaves the ruling party to join the opposition, such a politician has become a thief. And the act of labeling all the old politicians as thieves for lack of ideas about what to tell the electorate by some young politicians vying to be presidents is shocking.
It is like everyone must stereotype seemingly like the only way to gain votes. Nigerians expect issue based campaigns for them to be able to know whom to give their votes. But when issue are left out of a political campaign, the election can still go the unexpected way. It is the misfortune of electioneering in Nigeria.
​