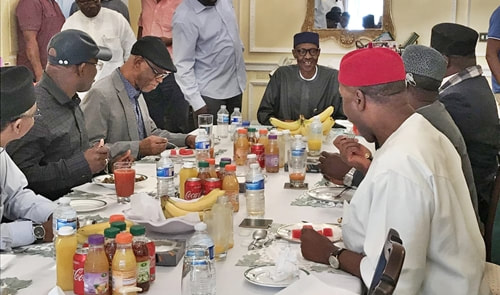 President Buhari hospitalized in London here meets with some governors elected on the platform of the ruling party.
The question about the whereabouts of the Nigerian President Muhammad Buhari is no longer new. The question has been asked time and time again, and the president's media handlers have said that the president is sick and that he is undergoing medical check up in London.
But the question has been recurring instead of going away, because President Buhari seems to have gone into the oblivion and seems to be nowhere close to his country.
The entire episode about President Buhari illness and hospitalization in London has turned into a drama, and one that has become money spinning, at a time that the country's income has nosedived.
The president is hospitalized in London at the expense of the country. The wife goes to see him from time to time at the expense of the country. His second in command, who has been acting president in the absence of the president also travel whenever necessary to see his boss at the expense of the country.
Some state governors elected on the platform of the ruling party also go to see the president in London to affirm to the world that the president is alive and not on life machine, also at the expense of the country. Governors on the ruling party's platform recent journey to London and their photographs with President Buhari show that the governors and their president are people who know how to spend the people's money, when the people are down and almost out economically.
They governors were on a roundtable with the president at the head of the table presiding. No one who does not know that the president has been in the hospital running to three months would know the president is sick. But the president is sick and he is still in a London hospital on the order of unknown British doctors. The president has been in london first for two months and now for another two months, and running to about five months.
My 16 years old daughter lookeds at her president  country's situation during a visit to Brooklyn last week and on our way back to the house and said, "Nigeria is sick. Nigeria is in a London hospital and no one is sure whether or not Nigeria will get out of the hospital alive." When asked to expatiate on her statement, she said that the president that symbolizes the country is hospitalized and that the country, politically and economically, is derailing.
My daughter said that she believes that Nigeria is sick, sick top the bones. And that what makes Nigeria's case a worse scenario is that the country's president is also sick and no Nigerian knows about the true state of the president's health. The photograph posted in some Nigerian newspapers, showing the president presiding on a long table with some of his ruling party governors, cannot also be believed, because many Nigerians say that anything is possible in Nigeria.
Therefore, nigerians are asking about the whereabouts of President Buhari, their president and equally asking about Nigeria and what will become the country in the next six months as my daughter has asked, unsure that her country will still be the same country we have all known as Nigeria.
Many Nigerians are asking about what their president is still doing in London, if it is true that the president is hale and hearty as shown in the photograph here. Sadly, one of the governors on the table with the president in the picture has told the media in Nigeria that they the governors during their visit advised Buhari not to rush home.
Comment Box is loading comments...
NEWS AND FEATURES
News & Features Around The World