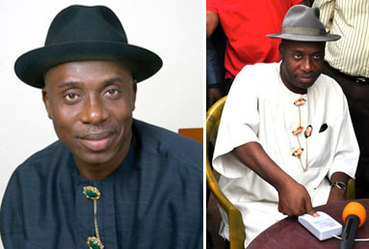 Rotimi Amaechi, Nigeria's Rivers State Governor
The tale of the Bombardier is about the purchase of an aircraft by the Rivers State Government in Nigeria. One issue sticks out of the tale; it is that officials of the Rivers State Government are claiming that the aircraft belongs to the state government, while the nation's National Airport Management Authority (NAMA) says that on paper the aircraft belongs to the Bank of Utah, a private organization in the United States. The truth about this charade came to light a week ago.
Rotimi Amaechi, the state governor had gone on a marathon flight across the country, flew over his own state from a nearby state of Owerri to Akure, capital of Ondo State, enroute Ado-Ekiti, Ekiti State, in the South West.The flight to the South West created what is here ascribed as the first part of the storm over what is now commonly called Amaechi’s Bombardier aircraft.
The second part of the story is a perfect smokescreen to cover up the real issue about the alleged shady ownership of the aircraft. We will come to the issue of the shady ownership of the Bombardier aircraft in a short-while being the real issue in contention.
Officials of the River State Government said that the problem they had for inability to fly the aircraft from Akure after they had finished their assignment in Ekiti was caused by the Federal Government of Nigeria, whose airport management authority stalled the aircraft from flying; and the following day after it eventually allowed the aircraft to fly from Akure to Portharcourt, barred it permanently from flying in the country. The state officials  erroneously linked the airport’s decision to the row between the governor and Goodluck Jonathan, the country’s president.
The president and the governor belongs to the same party, but fall out with each other because the governor’s act as a Gadfly empowered by his
position as chairman of the country’s governors' forum. The governor reportedly began flirting with members of the opposition with an eye on their
vice-presidential ticket for the next presidential election. Amaechi chose to be the opposition’s  Sir Gawain, but he did not consider a lesson the Green Knight taught Sir Gawain about purity and the need to be above board and be men of our own words. Amaechi pledged to be loyal to the people of Rivers State who voted him into office. He should have ensured that the aircraft was registered in the name of the state. By allowing the aircraft registration in another name, he has put the trust the people placed on him in question. By his officials' claim that the plane registered in a private company's name belongs to the state is disloyalty to the voters.
The problem over the aircraft arose because, either the governor or whoever finalized the purchase of the Bombardier did not think about the need to be above board. The River State Government officials felt that because Amaechi’s was having a row with the president, the airport authority should have overlooked the need to ensure regulations at the airport. The fact that Amaechi knew he had called the president’s bluff for political reasons was the more reason he should have ensured everything was in order with his Bombardier, which state officials now say belongs to the state government, contrary to what is on paper.
The second issue is the row between the president and the governor. This is a game of power play. If Amaechi thinks he has what it takes to continue on his role as chairman of the governor and he could defeat the president he could continue with the opposition. But the way his state officials have argued the aircraft issue before the latest publication by the Guardian newspapers that the officials have eventually tendered a document showing the aircraft belongs to the state  leaves much to be desired. Why did not the officials tender the document earlier before the  reported Nigeria Civil Aviation Authority's threat to sue the state for forgery?