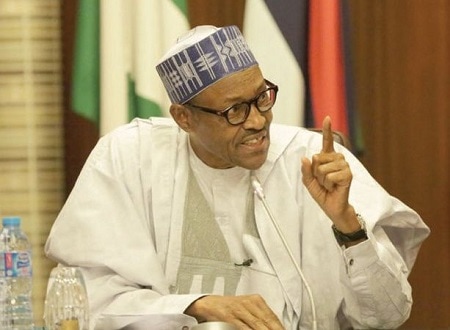 President Muhammad Buhari
President Muhammad Buhari is somewhere in Britain receiving medical attention. But no Nigerian knows the name of the hospital, where the president has been receiving medical attention, and actual condition of the president.
Is the president dead or alive, or is he on life support? And is there any hope of him returning to help the country towards finding lasting solution to its myriad problems?
​    But the media reported more than 50 days ago, that the president had traveled for follow up on his medical treatment, having been away earlier for a long time, for the same reason.
Just few days ago, Governor Ayodele Fayose of Ekiti State said that President Buhari has been on life support since June 6, at an undisclosed West End hospital in London, and that the last time the president's wife, Aisha Buhari, traveled to London to see her husband, she was not allowed to see him. And that only three of the president's men are allowed to see him. He challenged the ruling party to admit or deny his assertion.
In a statement on Friday, Nigeria's ruling party's chairman, John Odigie Oyegun, said that the president is recovering in a robust manner. Hun. And he the chairman hopes the president takes it easy, and that when the president returns, he the chairman has no doubt at all that the president will have a new and active period of activities. But as the party's chairman, he added that it is only the president's doctors abroad could decide when the president would be fit enough to return to the country.
Obviously, Oyegun has not succeeded in dismissing Fayose's statement about the president's health situation, likely been shrouded from the public by the party, but has merely helped to confuse the situation. He is unaware of the president's health situation and that only the president's doctors could say when he is fit enough to return to the country.
Is it true or not that the president is on life support? No one can say or deny Fayose's statement. The only reality is that it is highly uncertain that when the president eventually returns to the country, he will be active enough to work and still not be forced to return to the London's undisclosed location, where he has become hostage to some unknown doctors.
The last time the president returned to the country, he was almost incommunicado, before he returned to his undisclosed medical location in London. The president's sickness, his condition and the location of the hospital - where he is receiving medical attention, are shrouded in secrecy.
Many Nigerians have tried to forget about the president and forge ahead with the struggle for survival as arduous as that task has become in the face of worsening power supply and economic situation. Rich Nigerians and senior government officials run abroad for medical attention, but poor Nigerians have no where to run than the half baked hospitals in the country. ​
For now, President Buhari's first priority is his health, before any other. And many people believe it is why he can leave the country for such a long time and careless about the situation in the country. Ideally, people believe that the president's problem is not his fault, since  he has no control over his health. And the reason they believe the unknown London doctors have assumed so much control over the president's health.
Since Nigerians don't know their president's health situation other than he is sick and not in the country, and are unaware where he has been receiving medical attention in London, how would they know how much is being paid to the unknown doctors, who all have assumed life and death control over the president's life? As long as the needed pound sterlings or dollars have been spinning into their hospital's accounts uninhibited.
HTML Comment Box is loading comments...
NEWS AND FEATURES
News & Features Around The World