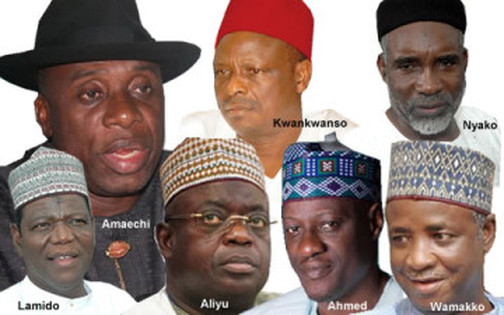 The dissident governors (Courtesy: edge.punching.com)
An earthquake is usually accompanied by reverberation and uneasiness; it seems to be the case in Nigeria's political firmament last week, following the decamping of five sitting governors of the ruling party to the opposition over what some observers have said is over the sharing of oil revenue.
News reports say that five sitting governors of the Nigeria’s People Democratic Party, PDP, have decamped to the opposition, making Nigerians question the rationale for the governors' decision, despite month of their wrangling with the PDP and the presidency.
One of the seven governors, Aliyu Magatakarda Wammako of Sokoto State, who have been at loggerhead with the ruling People Democratic Party, PDP, was asked by reporters on arrival from a trip to Senegal, the reason behind the defection of the five of them.
“Our decision is to salvage Nigeria,” he told reporters and added that he was a party to the decision to decamp from the People Democratic Party, PDP, to the All People Congress, APC.
Of the 7 governors who originally have been at a cross with the ruling party, only five have crossed to the opposition, leaving two undecided or confused about what to do.
Governor Sule Lamido of Jigawa State is reported to have developed cold feet, because his two children have been embroiled with the Economic and Financial Crimes Commission, EFCC, over allegations of money laundering involving millions of the state’s money. He was reported to have told the press that he remained a loyal member of the PDP.
Aliyu Babangida of Niger State was reported to have disassociated himself from the announced merger of the New PDP with the opposition. Reports said that his decision is not unconnected with possibility of the former head of state, Ibrahim Babangida, seizing the opportunity of a defection by him to use the ruling party’s structure for his son’s aspiration to be governor in the state.
Many Nigerians say it has been a tough battle for President Goodluck Jonathan managing the ship of state, while he tries to pacify the dissident members of his party in meeting after meeting for them not to abandon the party. Now that the governors have merged with the opposition, people say their new PDP’s aspiration is dead, and the president can pay attention to state issues.
Observers say that before their eventual jumping of ship, the seven defected governors had said they were working to salvage the PDP. Now that they have defected, since they could not achieve their aim in the PDP,  because the PDP refused to accede to their demands, they are saying that their resolve to join the opposition party stemmed from the need to salvage Nigeria.
Many Nigerians view the governors’ departure from the party as a bad omen for the ruling party, and that the development might help the opposition’s effort to dislodge the PDP from the presidential villa. But political pundits say it is not so easy to win the presidential election and a whole lot of factors will need to be considered.
Now the opposition is working to make as many legislators in the National Assembly defect with the governors toward making the PDP a minority party. Observers see the development as capable of leading to do or die battle, not about how to salvage Nigeria or Nigerians but over oil revenue. Already, all sorts of permutations are at work over the possibility of many law makers decamping with the dissident governors.
Some members of the PDP are saying any law maker who decamps would lose his seat; the chairman of the unregistered new PDP that the dissident's claim belong to them said the law makers are free to decamp, but legal craftsmen are saying those who wish to decamp with the governors must be able to show that their party has been fragmented.
This development has made observers to say Nigeria will be an interesting country to watch between now and 2015, when it will go to the polls for the presidential election.