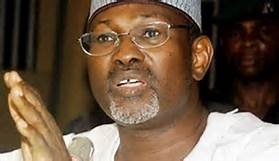 INEC's Attahiru Jega
Postponement of presidential and the Congressional elections in Nigeria from February 14 to March 28 and April 11  2015, following a change in the country's election timetable on Sunday, is fraying nerves. The ruling party, People Democratic Party, PDP, accepted the change in the election time table, while the opposition party, All People Congress, APC, accepted the change, but cried fouls.
The Independent Electoral Commission, INEC says it has postponed the elections, because security agencies in the country say they cannot assure security, while fully engaged against Boko Haram in the North East of the country.
The APC is joined by many in the civil society and the international community, decrying the election postponement by INEC, charged with conduct and election management in the country.
The APC had cried aloud about its suspicions that the PDP had a plan to change election timetable, because of a fear of defeat in the polls. But the ruling had said it did not have such a plan.
The challenge before the opposition party began with a call by the National Security Adviser, Sambo Dasuki, who said at a London fora that there may likely be a call for election postponement, because INEC had not ensured all voters had their voting card.but INEC came against Dasuki's statement that it was fully ready for the elections as about 66 percent of voters already had their cards.
The country's Council of State held a meeting, comprising the sitting president and his deputy, all former head of states, former Supreme Court judges and Congressional leaders. They discussed the election and the security situation in the country and asked if INEC was ready for the elections.
INEC said it was ready. However, reports said the ruling party governors were in support of moving the elections dates forward, while opposition governors were against it. Former head of states and and former judge were also said to have frowned against any changes in the election timetable. The meeting closed with INEC having the last say to determine, whether or not it could hold the elections. It promised to consult with stakeholders and feedback.
However, Observers say the danger in the Nigerian situation is not the election timetable change, but an accusation against INEC chairman Attahiru Jega, by some power group in the country, North and South, that Jega had compromised by meetings with some Emirs in the North of the country for a plan to return power to the North.
Jega's accusers said it was why a larger percentage of registered voters in some parts of the North had collected their voters' cards, while a large number in the South were yet to. The accusers, including Balarabe Musa, a known critic of the ruling party, said they may call on voters in the South if the Federal Government fails to sack Jega. But Jega says his hands are clean.
Latest information suggests that Jega is exercising INEC's independence to determine the electoral body's decisions, as some military personnel said they did not say security agencies were not ready for the elections. There are words making their rounds that Jega may be removed from office.
The APC is threatening fire and brimstone if he is removed and that it will not tolerate further change in the election timetable. The party's presidential candidate, Muhammed Buhari, had warned that further postponement of the election could amount to a coup against the country and democracy.
NEWS AND FEATURES
News & Features Around The World