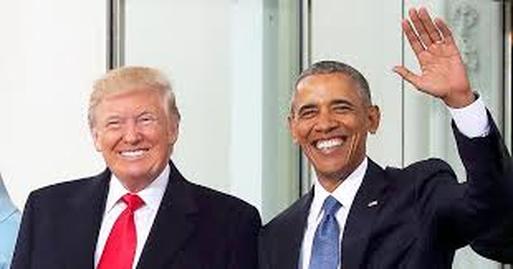 President Barack Obama and his successor, President Donald Trump
A new health care bill was passed on Thursday in the House of Representatives with 217-213 votes, toward repealing and replacing the Affordable Care Act, otherwise called 'Obamacare'. The bill has been forwarded to the senate for further consideration.
​  The passing of the bill in the House is considered a big victory for President Donald Trump and the Republican Party, given the opposition against from Democratic Party, last failed effort to pass the bill and today's success.
Minority leader, Nancy Pelosi, said that moderates who have voted for the new bill should consider themselves as radical from today. While Senator Rand Paul said that the Freedom caucus has made the news bill better than it was at the first time.
Every curious observer may have seen this coming, even after the failure to get the bill passed at the House first attempt and the opposition from certain caucuses of the party, led by the Freedom caucus, toward ensuring a health care package, which does not disenfranchise a large number of Americans from health care.
At that time, the Democrats and their supporters said that the Republican Party cannot achieve a simple legislation, despite the party's control of the House and senate. But Global Pentorch sounded a warning note that the the failure of the party to unite and pass the bill at the first attempt should not be seen as the end of efforts to repeal and replace Obama care.
The Democrats position was that there is no need of repealing and replacing Obama Care, but that whatever was wrong with the health law can be amended. President Barack Obama also said that the Congress can help amend the law and retain it. But President Trump's has been to fulfill the promise to the electorates to repeal and replace the health law and replace it with a workable health.
Who was right and wrong between the Republicans and the Democrats? Was the law so bad that it required to be replaced as demanded by the Republicans against the Democrats for mere surgical operation on the law and retain it ...instead of repealing and replacing it?
The answer to the question comes various arguments during the election campaign and news reports about the crumbling of Obama Care about how insurers and doctors no longer think it is fit as a health law, due to the increase of premiums and other ills associated with the law.
​ Former President Bill Clinton lambasted the health law in Ohio, while he campaigned for his wife. The bad information had circulated in the media and the public and the Democratic Party was helpless at Clinton's swipe against the health law.
However, there are words that some moderate and independents in the Congress have said that the current bill meant to replace Obama Care itself is imperfect. bringing about a question whether it will ever be possible to get a perfect health law. But there are people who are saying that with the control of the senate in the Republican Party's hands, the passing of the bill as a done deal.