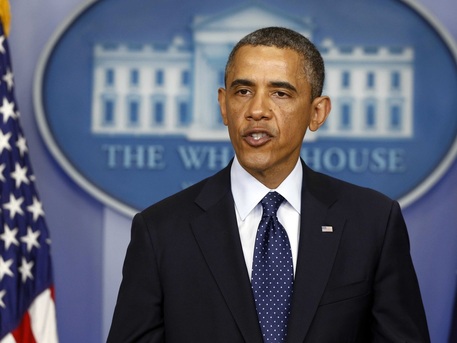 President Barack Obama
President Barack Obama of the United States had a philosophy that caused his opposition against America's war In Saddam Hussein's Iraq as a senator before his assumption of office as a president. Some other times, the president had said unless in alliance with NATO or American allies, America would not venture into fighting.
But on Saturday, the president is seen addressing the issue for an American intervention in Iraq much against his philosophy, caught between his philosophy and politics, and caused by events beyond his control, and showing that philosophy and politics are two different entities, each with different ways of approach.
Apparently, the president has abandoned his philosophy to embrace politics, and development may eventually lead to asking whether Obama's vote as a senator represent his philosophy or politics. But many Americans who voted for Obama to be president had viewed his vote against Iraq invasion as a philosophy. Obama extended what his followers had viewed as a philosophy in the course of of Libyan intervention that America will not venture into fighting without the allies.
The current situation in Iraq and America's involvement calls into question the president's speech about not taking the country into a war without the allies. A war can be fought on the ground, in the air and on water. It is not necessarily meant that fighting becomes a war when the boots are on the ground. And the confusion that has brought the president into this mess is still an effort to live the philosophy of disengaging America from what he regards as an unnecessary engagement in Iraq.
If the president has termed Iraq an unnecessary engagement, how would he now go back to the allies for them to come and give their support in an unnecessary engagement? Can that be the reason America is going it alone in Iraq to save Noura Al-Maliki from a nemesis of a policy the president has described as lacking inclusion? How can humanitarian services be aligned with fighting form the air and an engagement that may continue until near comrades of yesterday who have suddenly become enemies are taken out?
It is here that President Obama's abandonment of philosophy for politics is manifest. The ISIS were in Syria fighting to get rid of Bashir al-Assad. Intelligence reports showered that there were militants among the rebels fighting Al-Assad. It took the U.S a long time to decide whether to support the rebel or not to avoid giving arms to militants. Eventually, the administration said it had discovered moderate forces to be armed against Assad in Syria. Whatever may have happened to the militants in Syria, they have been beneficiaries of massive support from different countries who want Al-Assad out.
But when al-Assad became difficult to be ousted, the moderate rebels turned the fire against the militants, and the militants having no where to go, head toward establishing their caliphate from a part of Syria and Iraq. What is not clear is whether the militants want to drove Al-Maliki away from Iraq and take over the wholesale or just take a part of the country and leave al-Maliki  with a percentage that fate wishes. For over one month, the U.S was noncommittal to going to fight in Iraq, when the call for help came from Al-Maliki.
When the militants had almost taken the country and showing determination of driving Al-Maliki into the Arabian desert, and the accusation from Republicans at home here in the U.S assailed Obama for his pulling off the entire American force, the need to offer humanitarian assistance to stave off the militants from encroaching on the minority's right to life and that demands dropping bombs on the militants and essential needs to the minority Christians caught in the Iraq's crucifix and that explains the reason for President Obama's abandonment of philosophy for politics.
Some observers think Obama has switched to politics to satisfy Republican Party members who say he has taken out entire American soldiers from Iraq and should be responsible for policy failure there. Other observers say Obama has American tax payers behind him for his total removal of American forces from Iraq. They say the president makes an election promise and he fufils it, and whatever he is doing now to help Iraq is for compassionate reason. They ask about the availability of money to be fighting wars. It shows that the president is not alone and that he has Americans behind him. The explanation the president has been making in interviews to inform Americans of the sudden turn around in policy.