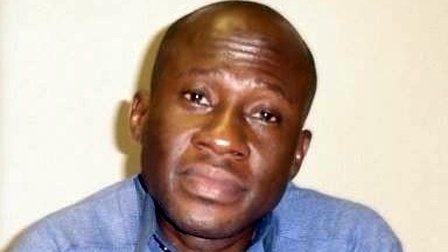 Isa Muazu
The news that the aircraft carrying Isa Muazu - a Nigerian denied asylum in the United Kingdom - was disallowed landing in Nigeria and returned to the UK with Muazu,  had sent tongues wagging that it could be effect of Muazu's  prayers.
According to the latest news by the BBC, the private jet that the U.K. government provided for Muazu's deportation to Nigeria arrived in the country's airspace; hovered for some hours, refused landingby the Nigerian Authority and returned to the U.K.
Muazu's has been in the news for sometime for hunger strike that has lasted over hundred days, because he is against deportation to Nigeria, his birth place. He said he came to the U.K. for a better life. And that if he returns to Nigeria, he fears that he might be persecuted by Boko Haram - a terrorist organization.
Information reveals that Muazu arrived in the UK in 2007 with a visitor's visa. In the course of time, he got a job in South East London before the U.K immigration detected his presence, when he applied for asylum in 2008 and was taken into custody. Since that time he has been on prayers and fasting, which in legal term can be termed hunger strike.
With his return to the U.K after an unsuccessful deportation bid by the home office, Muazu has been returned to the hospital wing of Harmonsdworth Detention Center, while calls for him to be allowed to remain in the country are gaining traction.
The public has noted the failure of the Home Office in Muazu's deportation; opposition politicians and the Observer newspaper have asked questions about the bungled handling of Muazu's case as well as the entire cost of making one man go through a miserable existence between the U.K and Nigeria at tax payers' expenses. It has propped talks about incompetence on the part of Theresa May, the home secretary, with a question from the Shadow immigration minister about how the Home Office could put a man in a medical condition on a long flight at taxpayers' expense with no agreement from anyone that the plane could actually land.
It is no the first time that a man has prayed and the effect is manifest. Christians will attest to several of such experiences that are recorded in the holy Bible. Elijah was reported to have prayed, and God sent down fire against his adversaries. People still believe that prayers avail much for those who believe and when in difficult circumstances.
The story about Muazu's experience also manifests what happens when political and economic condition in a country are dire, and the citizens are seeking ways to abandon the land, recalling the recent experience of Lampedusa, where hundreds of migrants died trying to cross to Europe in a boat.
Nigeria is a rich country with enormous resources at disposal, but mismanaged by successive government officials who only care about how much they can put away in their private accounts abroad than care about the welfare of ordinary Nigerians. The development has led to seismic corrupt system that transcends those in government and enveloping almost the entire landscape. Some observers often say it is the foundation that the country has inherited from UK, its colonial master.
Widget is loading comments...
NEWS AND FEATURES
News & Features Around The World