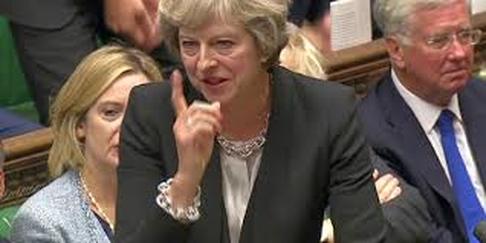 Theresa May (Courtesy: BBC)
The world is littered with problems arising from nature and man inhumanity to man. But the problems differ from country to country. Rarely are two countries with the same problem.
Though political problems can be categorized as same, but they still vary in term of seriousness. Serious poverty and hunger situation caused by political problems stand apart.
The political problems in the United States,South Africa, Kenya, United Kingdom and Venezuela are are very well pronounced, in comparison to the political problems in Nigeria and some other African countries, where dictatorship and lack of accountability rule.
The U.S. is struggling over its last election, results of the election and whether Russia influenced the outcome of the election. Just as Britons have completely overcome their differences over the Brexit votes and the decision to exit the European Union. The fight between the liberals and the Conservatives with President Trump as the leader of the Conservatives facing Special Prosecutor Mueller's investigation from a crisis arising from the fiasco and sacking of the former FBI director, James Comey.
On Wednesday the BBC reported Theresa May as saying that she is here for a long haul, not just to deliver the Brexit, but to correct injustices in the system. Both Britain and the U.S. are against liberalization of migration from backward and poverty ridden countries, and they are cutting down the number of migrants entering the countries and migrants without proper documentations. The U.S. government is proposing to build a wall in its southern border with Mexico. Though, the policy has created seriously manifest division between the Liberals and the Conservatives. Though, Britons voted to be out of Europe, Britain remains part of the cluster of countries comprising France, Belgium and Spain, where terror's new dimension of using moving vehicle against innocent citizens has assumed a new dimension.
The opposition in South Africa had attempted to remove Jacob Zuma from office with vote of no confidence over apparent issues of corruption, but derailed for inability to muster enough ANC votes. If the opposition had got enough votes, Zuma would have become history. Zuma is still in office, but very unpopular and leaving the ANC to decide the fate of his position in the party's primaries toward the next presidential election. Zuma's former wife, Dlamini has declared her intention to run on the platform of the ANC against Cyril Ramaphosa - favored by critics of Zuma's era.
Venezuela is in the jaw of trouble. Nicholas Maduro wants control, but the people are revolting against economic downturn and political management. Many people have blamed socialism for Venezuela's problem, but Maduro and his supporters think otherwise. He tries to manipulate the system in his own favor. With the warlike development in the country between protesters and police, sound sleep has become a stranger to Maduro. Sleeplessness is not limited to Venezuela's Maduro as Kenyan leaders seem to share the same headache at the moment.
What will happen in Kenya in the court room on Friday is the Kenya's Supreme Court judges' privilege. Only the judge know what the decision they will make. Uhuru Kenyatta does not know. Raila Odinga too does not know. None of their supporters know what Fridays hold for their leaders. Newspapers reports point to troublesome accesses into the servers of the electoral commission before and after the elections, with the chairman of the commission gaining access into servers without authority. How not to repeat the near genocide of 2013 is a priority here.
Togo is also on fire as opposition id demanding an end to Eyadema's dynasty in the country. Mugabe still has a tight fist on Zimbabwe, when he is supposed to be enjoying a period of retirement. Protesters forced Muhammad Buhari from London back to Nigeria, listened to three of his ministers and the governor of the Central bank, and said he was satisfied with the economic situation in the country. But many Nigerians are still crying of economic difficulties.
Iran, Iraq, Syria are Afghanistan are countries under the guns and bombs. North Korea's Kim Jong un does not know that the duty of a leader is to provide for the comfort of his people, but rather than do that he is wasting the countries money on procuring missiles upon missiles. Iranian leaders seem to be in the same garb. People live in poverty, and their leaders looking for nukes. The Arab countries are in disunity over accusation that one of them has been supporting terrorism and seek an apology. But the erring country has been fighting back..
Aside from political problems, only the U.S. and Sierra Leone share same fate of having avoidable death and destruction from the wrath of nature. Although nature's wrath knows no country or language, it distributes discomforts around the world it pleases. One night of rain killed over 300 people in Sierra Leone, where people woke up to wails of death aaaaaaaand destruction. The death from Hurricane Harvey in the U.S. has also climbed to over 30.