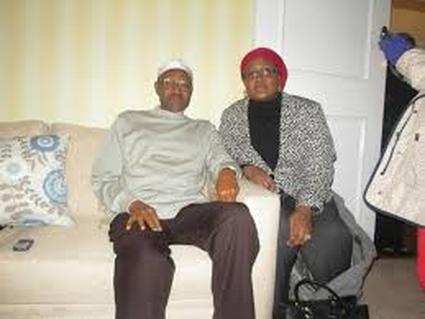 The President and his wife
Can an American president, irrespective of who he or she may be and regardless of his or her party affiliation, go on medical vacation and Americans unaware of his or her real medical concerns?
Many people say that this is impossible in America, especially for the president to be absent for a long period and be asking the Congress to allow him indefinite stay, based on his own words without any substantial testimony from doctors.
In Nigeria, the president has been away from the country for over one month on medical vacation, and he has written more than once asking the country's National Assembly, asking for indefinite absence to address issues raised by doctors on his state of health. First, he was scheduled to return to Nigeria on February 6, but wrote to the National Assembly for an extension of time, to be away for enough rest, reliably on doctor's recommendation.
He was granted without questions. And those who have been asking questions have ready made answers from the presidency that the president is hale and hearty. When questions became loud about the president's health concerns, critical members of the public receive accusations from the seat of power of wishing the president's dead.
Although, the president has to stay away to rest based on what his his handlers say are his doctor's advise, Nigerians should not worry or worry less, because he is alive, hale and hearty, and everything should be all right for Nigeria and Nigerians, as long as the president's deputy takes care of business in his absence.
Yet, Nigeria and the United States are both democratic countries.  Many Nigerians are already saying there is no basis for comparison between the democracy in Nigeria and the U.S. Some are almost describing the democracy in the U.S. as original and the one in Nigeria as Pseudo-Democracy,  something that looks like democracy, but not the real thing.
The development has led to questions about how open can countries be about their president's health and the president's life in general. The Nigerian president handlers say that the president's health is his secret and they cannot say or disclose anything about the doctors' findings. In the U.S., it is an open secret that the moment a president is named, he or she no longer has any secret about his or her entire life. He seems to be owned by the country, his life, health and everything about him or her are in the country's name. The contrary seems to be the case in Nigeria, where the presidency has not stopped short of saying Nigerians should accept whatever the presidency says about the president's health or shut up.
However, for many other Nigerians, the presence or absence of the president does not change their fortune, which at the moment is the hunger pang in the country. Some of the political elites in the ruling party have visited London and their photographs with the president published in newspapers, to convince Nigerians that the president is hale and hearty. But opposition politicians describe the London visit by ruling party members and photographs with the president as charade, not  convincing enough to tell Nigerians that the president is hale and hearty.
Observers in the country wonder how a president can leave his country and be outside for longer than one month for health reasons and the people are unaware of his health issues. Many other people are asking whether Nigerians have no doctors capable of handling the president's health issues. The fact is that governments in Nigeria have left the health sector undeveloped, while highly placed government officials and the rich rely on doctors outside the country for their medical needs, while poor Nigerians are made to rely on the half baked hospitals in the country.
Premium Times, one of the country's newspapers, tallies and publishes the numbers of days, which the president has been away from the country, as 39 days, 17 hours, 41 minutes and 13 seconds as at 11.41 am today.
NEWS AND FEATURES
News & Features Around The World