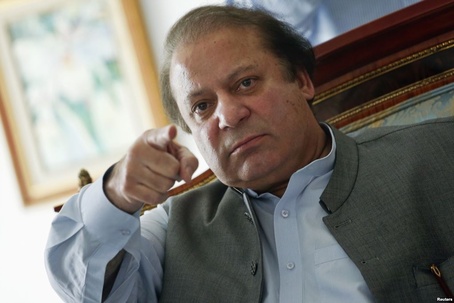 Pakistan's PM, Nawaz Sharif
Depending on the outcome of a murder case from death of 14 people at a protest in Lahore in June 2014, Pakistan may be etching its name among nations with rule of law or otherwise.
This is the summation from a news report that says the country's prime minister, Nawaz Sharif, his brother and 22 others have been been ordered listed on a murder charge by a Lahore court.
The order was given for their names to be registered by a court that heard the case with Pakistani Awani Tai, PAT, as plaintiff, according to a report in Xinhua.
PAT filed the case in court following the death of 14 protesters in June from police bullets at a rally that became violent.
At the time of the incident, the provincial government had formed a one member inquiry panel to probe circumstances that led to the breakdown of law and order.
Pat reportedly boycotted the inquiry's sitting, but filed a a petition for the court to list the authorities and the prime minister in the case.
There has been no reaction from the government over the court's ruling.