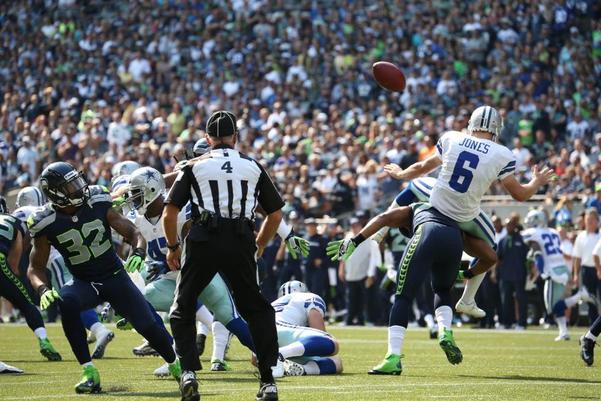 Seattle Seahawks in action
The Super Bowl - grand finale of the United States' N.F. L football competition - is always the talk  of the town, whenever and wherever it is hosted. This is not unexpected in a country, where virtually every growing boy wants to play football, be a star and be rich. This explains the  buzz in New York  and New Jersey over hosting the game this weekend. Everyone in New York and New Jersey knows that the parties heralding the game have started a week or more ahead of the game.
Janina Lazarz is resident in Jersey City across the Hudson River. She arrived work in New York on Monday and announced with glee how her neighborhood had been transformed by arriving players and officials of the two teams billed to lock horns on Sunday in the Super Bowl. She mentioned hotels the players and officials had been lodged and that she had snapped photographs to buttress her assertion a party was in the  making. A day after her disclosure, the NYNJ Super Bowl media event was held; everything about the arrival of the players and their officials into town; the hotels they were lodged and parties lined up for the event became public.
People who don't read between the lines of stories about the game in newspapers and online or listen attentively to the television and radio information would think the game is entirely a New York event. But with more information making its round, it becomes obvious that the game is being hosted by New York and New Jersey and the game will be played at MetLife Stadium in New Jersey and that New York as a foremost commercial city and media center has helped turned the game into a media event. The argument over the host of the game has spilled into the twitter. Some have twitted that the game will be played at the MetLife iStadium in New Jersey. Therefore, it is unacceptable to say it will hold in New York. But the games twitter handle  'nynjsuperbowl' has helped in resolving the dilemma and it is apparent both New York and New Jersey are hosts of the game.
Yveline Thomas of Hofstra University's communication department says, "This will be an exciting game. I love the Seahawks for how the team has evolved. Manning of the Denver Broncos a player I adore. The Giants is my team and the game will be played at MetLife stadium." Yveline is ecstatic about this game reminding one of a statement in Stubhub that it is simply riveting to see a game in person when these athletes hit the field to do battle on the gridiron.
Charles Macleod said none of the teams playing the Super Bowl comes from New York or New Jersey and for this reason he will not be at the stadium. Secondly, he said he cannot afford the ticket for the game. "I cannot afford $2000.00 because I am a struggling man. Aside from those of us who would not be at the stadium for high price of tickets, there would still be between the media and the fans of both teams over 90,000 spectators. But if either of the teams is from New York, one should have expected close to 150,000 spectators." Macleod said no New York team is in the Super Bowl because they don't have what it takes to be there unlike those teams that have made it to the final of the nation's football competition.
Hector Colon said he wishes he can be at the stadium on Sunday, but turning his wish into fulfillment is problematic because of the cost. "It costs godamn too much to be at that stadium. It will be better I watch it on the television because I cannot afford between $1000.00 and $2000.00."
Andrea M. said, "I cannot afford it. I am not there yet. Give me a few more years." Virtually everyone interviewed by Global Pentorch expresses a wish to be at the stadium, but for one reason or another will prefer to watch the game on television either in the house or some other places. Meaning that apart from the stadium, the Super Bowl parties will continue across the country in various homes, bars and places of work where people are bound to pay attention to the game on the television - the gorilla of the media industry (Robert A. Pappa) author of Broadcast News and Writing Stylebook.
The parties that have started after the teams' qualification for the Super Bowl have continued with the their arrival in New York and New Jersey and they have continued after the media day.
Everyone, including women of easy virtues are catching on the buzz to party. People believe that where there are products, there bounds to be buyers, irrespective of news reports about police arrests of women said to have been caught in the habit. In another development, fans are peeved with the police for baring them from meeting with players at one of the hotels of their lodging. Of course parties require safe environment. For this reason, the police has heavy presence with sniffing dogs in New York and New Jersey for the game. The parties seem to be just beginning since the result of the game will culminate into another rounds of partying for the winning team and their fans.
NEWS AND FEATURES
News & Features Around The World