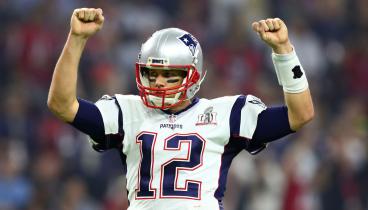 Tom Brady
People  are talking about New England's Patriots' comeback from the brink and victory and the victory over the Atlanta Falcons, 34-28, on Sunday, at Houston's NRG Stadium.
Of course, people cannot talk about the Patriots' victory without mentioning Tom Brady, the team's quarterback, whom they say, rallied his team to a stunning result, after the world saw them down on the field of play and thought they were out!
Falcons reportedly led with about 25 points early in the game, before the Patriots began to score, caught up with the Falcons, forced the game into overtime - the first in the series of the Super Bowl, since inception,and ended the game with two super touchdowns.
Many people had bets on Falcons as the winning team. Analysts said it was certain that Falcons will win, and that as a team favorite in winning from the early part of the game, the Patriots was doomed. Many fans who underrated the Patriots bit their fingers in regret as they lost their bets and had nothing to celebrate.
With 25 points down early in the game, many fans thought the Patriots had lost and they left and missed seeing an act in what has become a story of great comeback. People talk all Sunday night that the Patriots' victory teaches a great lesson about tenacity of purpose and perseverance, and that anyone who think he or she is down and out can still make a comeback, with hard work and resolute aim.
There are losers in every game, just as there are winners. For the Atlanta Falcons and their supporters, the question must have been about what went wrong that made the team lost steam after it led the Patriots and the entire spectators felt Falcons had won the day, but failed to consolidate its lead, a lead, many people described as fantastic.
Just like a flash of light, the thought about a victory parade in Atlanta disappeared from Falcons' supporters minds, and transferred to that of the Patriots, who would now be holding a welcome victory parade in Boston on Tuesday. Now, everyone is talking about the Super Bowl between the Patriots and the Falcons as likely the most competitive ever and Tom Brady as the best that has happened to the Super Bowl.
NEWS AND FEATURES
News & Features Around The World