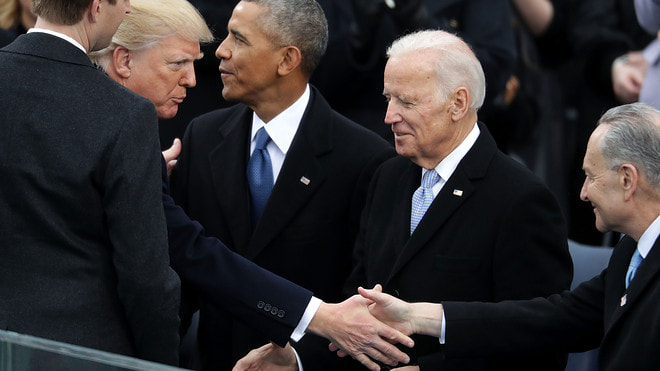 Donald Trump, Barack Obama , and Joe Biden
The entire world is a witness to the rancorous challenge in the current United States elections.
People in the country including the media are saying the problem with the country's election has not just started.
The history of the problem with the elections has been traced to 2000 elections, when President George Bush and Al Gore locked horns over election outcome in Florida.
Some people are saying the pain of the election of  2000 in Florida where the Democratic Party candidate, Al Gore lost to Bush has been resurrecting every election year, and the worst election scenario before the current trouble was in 2106, when the outgoing President Donald Trump defeated Hillary Clinton.
Some people have said that the election of a black president in 2008 exacerbated the seeming trouble the country's election cool atmosphere. We all can remember the three major candidates for the 2008 election. Senator John McCain vied and defeated his opponents on the Republican side, while Clinton and Obama fought it out on the Democratic Party's platform. After McCain had snatched the Republican Party's ticket, Clinton and Obama slugged it out far into the night before Obama's defeat of Clinton. It was the beginning of the death of Clinton's presidential hope.
At the time, this reporter lacked the knowledge of the existence of Clinton political machine in the U.S. During a political science class session during his sophomore year in college, a lecturer asked his students whom of the three candidates the students thought could win the election . All the students in the classroom except this reporter said Clinton could emerge as the next president of the U.S. The professor asked the reporter who did not think Clinton could win the election to tell the class why he thought otherwise.
"McCain has the star-studded stature among the contenders to be the next president of the U.S, but the Republican Party's image before the public has robbed him that opportunity. That leaves the opportunity between Clinton and Obama. If I have to follow what people on the street and my neighborhood are saying about why Clinton is seeking to return to the White House after eight years in the place with her husband, I can say that if this relatively unknown guy called Obama can work hard and defeat Clinton in their party's primary election, he could be the next president.".
"What are you saying?" The professor shot back. "It is clear you don't know what is called Clinton political machine. If you know how powerful the Clinton political machine is, you would not think she could lose this election," the professor concluded. As event had it, Obama defeated Clinton in the primary election. He later defeated McCain in the presidential election and he emerged the president.
Obama picked Clinton as his secretary of state, something observers described as a smart move to forestall the Clinton political machine from frustrating his administration. Of course, Clinton failed to see the deeming of her own political ambition as she was still determined to contest the next election. Her defeat in the next presidential drive seemed to have nailed her presidential ambition, given her age and the Democratic Party's shift to the extreme left.
The Democratic Party is fighting to return to power with the new drive of it is either our way or the highway. The Trump administration has been in a fight for survival from day one of the administration's time in office. The Democratic Party not only plans to win an election, but to completely change the American political landscape and to place the Republican party in abeyance.  It is difficult to understand why the party is planning plan to do something akin killing the Democracy in the country, remove America from the path of a divided country, and take it to the path of a unified country at all cost, even if it means killing dissent and checks and balances in the system. .
It is uncertain whether Clinton has been assuaged  with Joe Biden's victory, unlike other Democrats who are happy at the outcome of the elections. Can appointing her as the country's United Nation's representative as being touted means a way to return her to the nation's political drumbeat? The power play will be something of interest to continue to monitor and see the direction it goes with the senate already almost out of the party's, and the likelihood of Georgia State voters acting as a firewall to safe the nation's democracy in forthcoming two run-off senate elections.
Meanwhile, the Democratic Party, and Joe Biden, the president-elect, have Trump's court challenges and his refusal to concede to Biden to contend with. Some people are saying that Trump's challenge of the election is a continuation of the rancor among political power players in the country. They point to Trump's own 2016 election victory and  bitter experience to delegitimize his presidency in his entire four years as a president.