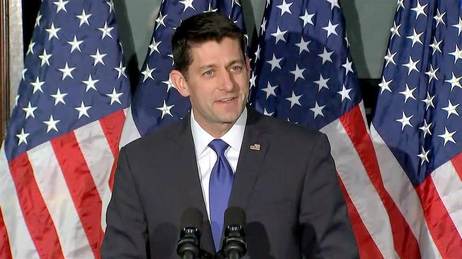 Paul Ryan
Paul Ryan, the Speaker of the United States' House of Representatives, ended his dramatic indecision about whether or not to support Donald Trump, the Republican Party's presumptive nominee on Thursday.
For over three weeks, the news media fed the public with information about the from the Conservatives' highest office holder that he was not ready to endorse Trump, amid jitters among several other anti-Trump crowd, over Trump's triumph in the party's primary elections.
Many people are asking why it has taken Ryan so long time for him to endorse his party's flag bearer. Some media reports have answered the question that Ryan has been caught between endorsing Trump and jeopardizing his 2019 presidential dream. Although, Ryan himself said he had not reached the decision whether to or not to endorse Trump, because according to him there was a need to bring members of the party together, following a bruised primary election campaign.
But many people say that Ryan's early endorsement would have helped a longer way in helping to unite the party than what is now seen as his late and reluctant endorsement. But some are careless whether Ryan's endorsement is late or reluctant, they feel relieved that Ryan has done what he is expected to do to help galvanize the toward the general elections, and hoping that others in the Congress who fear they will lose election in their constituencies should see Ryan's bold statesmanship as against personal and selfish agenda.
The fear of losing election in their constituencies, which many of the republican Party Congressmen and women have advanced as reason for their reluctance to endorse Trump has been proved to be selfish by observers who say and ask about what is wrong for anyone to lose an election and become like everyone who have to file applications in search of employment. They see these Congress men and women's position as saying they care about themselves and that voters' decision don't matter to them or that they will do anything to influence voters' decision.
It is one of the reasons many voters complain about Washington politicians as being their for themselves and not for voters' welfare, and the reason many curious observers are laughing at Hillary Clinton's Campaign's catchword "Fighting For us" as a little deceptive, because many voters believe that Washington politicians no longer fight for anyone, but for themselves. Back to Ryan, observers say with his endorsement of Trump, he has separated himself from Mitt Romney in public's view.
The earlier believe was that as running mate in Romney's ill-fated presidential run, Ryan may have been in the same boat with Romney and others, who thought it unthinkable that an outsider could come and take away what some career politicians feel belong to them.
NEWS AND FEATURES
News & Features Around The World