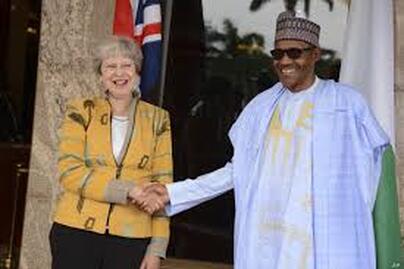 Theresa May and Muhammad Buhari
There are so many issues calling for attention to be attended to every morning. Since it is impossible to attend to all issues at the same time, it becomes necessary to work based on the importance of each matter competing for our attention. Yes, we can multi-task, but we are still required to give priority to some issues that require utmost urgency.
We all know about the importance of saving lives and the priority it deserves more than any other matter that may be on a list of agenda at anytime. And that If any other matter stands between saving lives and it would require a longer time to remove the obstacle, the need will be to circumvent removing that obstacle immediately and seek a short cut to save the life{s}.
In politics, promises are like life belts on a journey over the water. The politicians is required to fulfill promises made to the electorate to be adjudged fit for another consideration for the voters' approval. So the politician will do anything to prioritize and ensure the fulfillment of promises made. But fulfilling such promises should be seen as strong enough to skip attending to compelling needs of the electorate..
Consider president Muhammad Buhari of Nigeria fight against corruption, President Donald Trump's fight to keep undocumented immigrants away at the United States border with Mexico. The Nigerian government has prioritize the fight against corruption against provision of a better life for Nigerians because government leaders believe without first conquering corruption, it will be impossible to ensure better life for Nigerians. Nigerians are crying fir better life, while the government officials are asking for more time to conquer corruption for Nigerians to have a better life.
In the U..S., the border patrol agency is bury putting would be asylum seekers in hurriedly built tents for them to be processed and allow to enter the country if they are adjudged qualified to enter, because the government has promised to disallow entry into the country without formal processing. It is based on a promise made by Trump during the election campaign that he says he is working to fulfill. The promise was made to the American electorate and not the outsiders that are seeking to enter the country.
In Britain, Theresa May fell out of favor because of her inability to package an acceptable proposal to achieve the Brexit agenda. It is not clear why May failed in her bid to deliver. Didn't she worked hard enough towards achieving the goals or she had other issues that were obstacles between her and her goals? One thing was clear, and it was her failure to deliver.
Leaders ought to know the meaning of prioritizing toward achieving desirable goals and not allow competing demands throw them off the path of success. Buhari of Nigeria is still struggling because he does not seem to understand he requires a short cut make life better for Nigerians instead of allowing corruption and the war against it suck his energy. Compared to Trump's act at the southern border against political party opposition's calling attention to seeming and unfounded dehumanizing process of helping non-Americans at he border.