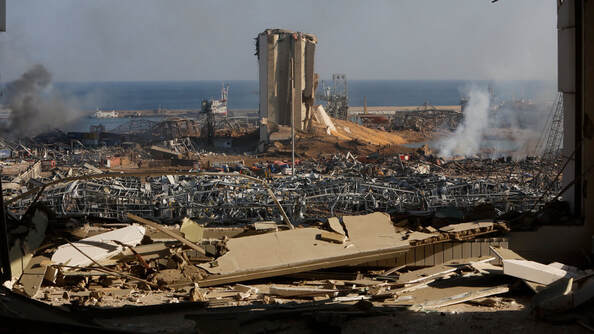 ​    A massive and spontaneous protest has continued in Beirut, Lebanon, following Tuesday's explosion that death of over 100 and scores of injured, and loses estimated at billions of dollars.
The number of death from Tuesday's explosion in Beirut has reportedly gone over 150, while searches for some 60 likely survivors have continued.
Protesters began a demand for the resignation of the country's President Michael Aoun, according to reports, to pave way for Lebanon's renewal amid reports that the country's leadership is targeting to punish people responsible for the negligence  leading to the storing of ammonium nitrate in the port area that reportedly caused the explosion and current mourning in the country.
Meanwhile, Hezbollah, a Shia Islamist political party and militant group the enjoys the support of Iran, had said it had no hand in the explosion that rocked Beirut on Tuesday, putting to rest that the explosion may have had political undertone towards the country's leadership.
However, Hezbollah's leadership is also a target of protesters whose anger has been caused by hunger, mismanagement and lack of acceptable political direction. It is thus apparent that Lebanese people are tired of both their rulers and the opposition, and they are angry as well.
President Aoun and the country's Prime Minister Hassan Diab are apparent target of resignation demand by protesters. It is not clear whether Aoun will allow the prime minister who he elected in January 2020 to resign while he will remain in office. If Diab leaves, it will be the second prime minister within a year to leave office in Lebanon.
Saad Hariri resigned as prime minister in October 2019, four months to the end of his term.
Widget is loading comments...
NEWS AND FEATURES
News & Features Around The World