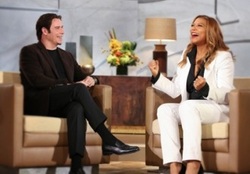 Queen Latifah and John Travolta
Queen Latifah began a day show on CBS television, New York, Monday morning, singing what sounded like an adaptation of George Benson's 'Give me the Night.'
She accompanied the song with dancing steps, and the audience joined in a happy mood. Dressed exactly as she appears in the photograph here, she accessed the studio through a passage, where there were workmen in session.
The workmen were attracted to her singing and dancing steps and they inquired about what was happening. She seized the opportunity and invited them to the show. They left their work and instruments behind, and followed her in toe.
She arrived into the studio with a large audience waiting. They joined in her singing and dancing, creating a joyful session before she was joined by John Travolta, followed by an introduction and both star spoke about respect for each other.
She is impressed by the size of her studio and the audience. She did not hide her delight and appreciation. It is a height of entertainment that brings to the fore the impact of singing and dancing in human live coupled with the natural radiation of joy.
Travolta described the Queen as a personality capable of filling a room with her presence, make everybody happy and doing it with humility and dignity. The Queen gave the same compliment about him. The Queen said she starred  working at age 17 and retired at 40 and now starring a show at 43 and one that will be staged daily. Travolta said that he also started out at 12.
She introduced her deejay. She gave compliment about the the deejay's good look, the deejay returned the compliment and said the Queen also looked fanstastic.
The undoubtedly has a happy and good time with riveting audience. The show continued the following day with Will Smith sitting where Travolta sat the first day. The Queen went on reminiscence on how Smith gave her the first shot on a television. The comedy cannot be put down. The show surely promises to be what it is means to be with the actors talking and telling stories, dancing and giving joy to spectators, giving hope to the hopeless and giving strength to the weak.
Comment Box is loading comments...
NEWS AND FEATURES
News & Features Around The World