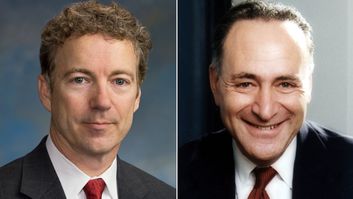 Senators Rand Paul and Charles Schumer
Senator Rand Paul of Kentucky has revealed that he has a formula for the search of a solution to repeal and replace Obamacare. The senator's revelation filtered into the public on Tuesday, and it seems to relieve the Party of a hangover over a deadlock about its intention to repeal Obamacare without a replacement.
Why is Senator Paul's revelation important in the current scheme about the need to repeal and replace Obamacare, a discussion that has been ignited by the President Elect Donald Trump campaign promise and the party's decision to kick the Affordable  Healthcare Act  into the dustbin of history?
When the Republican Party members first announced their intention against the Affordable Healthcare Act, Senator Paul was the only member of the party in the senate, who opposed repealing the healthcare without a replacement. He said he was not happy about the problems that have engulfed the health care program, but warned his colleagues of repealing the act without presenting an alternative solution.
His statement about the need to have a replacement before repealing the program has become a narrative for the Democratic Party members, who naturally opposes repealing of Obamacare, since they view the Republican Party's decision as political and determination to kill an Obama's presidential legacy. Senator Charles Schumer  of New York has said clearly in opposition to the Republican Party's announcement  to repeal Obamacare that Trump wants Obamacare repealed without a replacement,  adding that the Republican party have been working to repeal a program without having done their homework.
Now, with Senator Paul emerging with what he has called a solution to a debacle, observers are saying the Democratic party members, who may have thought they have a fine narrative against the Republican Party's position on the healthcare, will also need a new round of homework to counter Paul.
NEWS AND FEATURES
News & Features Around The World