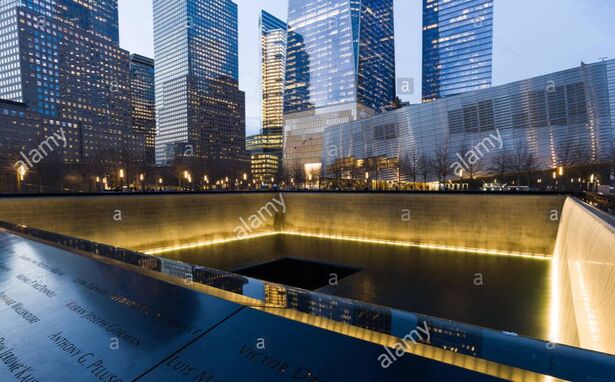 The World Trade Center: (Courtesy: Alamy Photos)
"The World Trade Center, WTC, lights illuminate from the ground to the sky. The entire Downtown Manhattan is fully lighted. I am safe at work."
A man just arriving his work place said in a text message, a response to an earlier phone call from his wife, explaining that the reported power outage at the West Side of Manhattan has affected train schedules on Saturday evening.
This is part of a nationwide reaction to the power outage at the West side of Manhattan in New York on Saturday evening, reliably caused by fire from a  transformer.
As usual, it was a big news for the media, because a large power outage affecting thousands of residents and businesses  is unusual in this part of the world.
The first major reaction is about how people will get to work and how the outage will affect businesses, as reports immediately show serious impact on the subway and the Broadway shows. Political leaders immediately swung into action to assure the public that the outage was caused by technical issues.
"How did you manage to get here?" One person was heard asking a colleague just arriving to work in Downtown Manhattan, given the fact that the man just arriving to work lives in the Queens Borough and trains A,B, C, and E  passing through Midtown have been reportedly affected by the outage, and trains cannot pass through the Midtown because the stations in Midtown are impacted..
"It is hell. It is unbelievable. I got out of the train that brought me from Queens to the Midtown, walked across the street from the West Side to the East Side and traveled on a Number 6 Train to get here".
A supervisor made a round at his place of work to ensure his men and women are all at work and asking each of them how they managed to get to work. "I did not encounter any problem because I came in from New Jersey. on a Ferry, since the Path Train does not run to New York on weekends due to upgrade and tests on the system."  Another guy said, " I just came in from  Long Island through the Long Island rail line. I passed through the Penn Station in Midtown. The place was unusually dark and not so busy with dots of emergency lights in the darkness.
The first major reaction from political leaders like Governor Andrew Cuomo of New York State and Mayor bill De Blasio of New York to the outage were assurances that there was no foul play behind the power outage. Both the governor and the mayor assured the public that Con-Edison was working to restore power and that by midnight some residents would have their power restored. Governor Cuomo said the power outage was unacceptable.
The West Side of New York is a concentration of highly valued businesses and stores, aside from the residential areas. Observers say that the businesses are lucky that the outage happened late in the day at the close of business. And that given the fact that most stores around the West Side don't open until about 12:00 noon on Sunday is an  opportunity that Con-Edison will work to restore power before the next day's business on Sunday.
Businesses mostly on Broadway that were expected to open late evening into the night and through to next morning of Sunday were already impacted and many shows cancelled. Standby generators are expected to help out before Con-Edison's efforts will begin to yield results late night into early morning.
This Saturday evening outage at the West Side is a reminder of the 2003 outage that affected the entire three boroughs of New York. And also a reminder that science and technology do encounter occasional accidents resulting in unavoidable failures or fluctuations. Remedies against such occurrences and loses are also inbuilt into the system by organizations that are proactive.