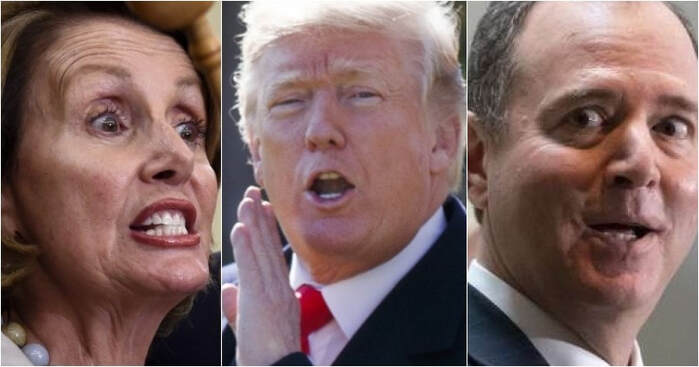 Nancy Pelosi, President Donald Trump and Adams Schiff
Power is sweet. Every political party wants to produce the president. The president is popular and powerful. It does not mean that the president does not have own enemies, who wish his removed from office alive or dead.
History is replete with stories of presidents shot dead for no justifiable reasons. Here In the United States, President Ronald Reagan, despite his popularity, missed the bullet's man target by an inch. In Nigeria, General Murtala Muhammed was gunned down in midday on a Friday on his way to the Mosque despite his popularity and the best leader Nigeria had produced.. And whether one is powerful or not, no one is without enemies.
President Ronald Trump is not an exemption with his experience. At least, his enemies have not made physical attempt against his life. All they want is remove him from office. They have forgotten about fairness and justice, and that power is transient. The danger is that this development will make vengeance part of America's politics. Next time, the Republican Party may also wait for a simple act of a Democratic Party's president and decides on impeachment. It is a dangerous matter for a man to sand-witched between his enemies.
But President Trump is fortunate that he is not alone. The Republican Party is solidly with him. He is alive and hopes to continue in the battle for power against his accusers. The transparency in the American system has helped to show the public that all the impeachment push by the Democratic Party controlled House against the president is questionable, and that it is nothing but the continuation of a senseless battle for political power. More of the role of transparency will continue when the impeachment hearing gets to the senate.
The president's accusers tried to scuttle the transparency but they failed. Unable to get evidence to substantiate their accusation for bribery and extortion, they began collection of information for obstruction of justice from the president's challenge of their legality or illegality of their hearing as a reason for impeachment. They think everyone will be like Socrates without any challenge to the conspiracy against him because of a belief in a certain deity. When Trump's accusers  tried to compare his case to that of President Richard Nixon, they provided no evidence for burglary to remove and destroy evidence.
Let the Republican party continue its support for the president. Let the president's supporters all over the country continue with their support form him. Let  the economy continue to boom. Let not the double standard and the madness in the liberal media worry you, though it should concern you that the media - the fourth estate of the realm has become so partisan even more than the politicians and unable to present the truth to help us navigate a dangerous time such as we are in. Don't waiver. Be strong as the president has been strong in the face of political attempt to remove him from office.
The Democrats lost the 2016 elections. They may be digging the hole for another loss in the 2020 elections with their impeachment bogey and their search for Socialism as a replacement for Capitalism. But in the next next election after 2020, they will be searching for Communism as better resort than all other systems..
Comment Box is loading comments...
NEWS AND FEATURES
News & Features Around The World