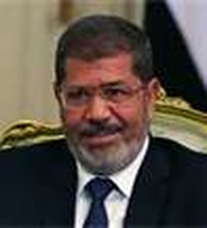 Mohamed Morsi
The Egyptian Army should restore Mohamed Morsi instead of continuing building on a shaky foundation of illegitimacy. The result of the irrational removal of Morsi is already obvious; restoring him to complete his term and for Egyptians to decide his fate in an election will be more manageable than the current maneuver by the Army to achieve the impossible. It is a shame countries that are supposed to condemn the evil against democracy in Egypt are finding peace with the hindrances there, because the usurpers have promised an election.
It is insulting to Egyptian voters that Quata, Saudi Arabia and the United Arab Emirates are promising money for the Egyptians to forgo their rights. Pathetically, the country’s media is reported to be in support of democracy derailment in favor of hand picked leaders.
People around the world woke up penultimate Monday to riotous political fire in Egypt. The people against President Mohamed Morsi leadership protested against what they called the excess of Muslim brotherhood and the president’s approval of it. The matter had been in the news three weeks earlier. The leaders of the protesting group held a meeting with the government over the proposed protest and a warning sounded from General el-Sisi that if the protest went out of control, the army will intervene.  A Morsi supporter said the nation should disregard the army’s warning. The protest began. Three days later, the army gave an ultimatum and later fulfilled its warning to intervene in the political process.
The army detained the president and suspended the constitution. General el-Sisi said the army’s intervention was to help the people and save the nation. He was silent about the president’s circumstance and what could be his supporters’ reaction and ultimately Egypt’s fate. Next was the appointment of a new president. The new president, Adli Mansour, a former head of the constitutional court said events in the country were welcomed and that a quick election will be held. The sack of President Morsi and selection of Mansour have led to doubling Egypt’s troubles. Morsi supporters unexpectedly denounced his sack and announced a decision to protest and seek Morsi restoration. Morsi supporters and those who wanted him out were pitched against one another.
A nasty weekend followed with the shooting of about 50 Morsi supporters. And the Egyptian political life came to a standstill. The army said the supporters were shot, having first shot at the army. The new man at the helm had been struggling to form a government; picked a deputy president and a premier amid confusion. But Morsi supporters said his government and planned election are illegitimate. What choice has General el-Sisi and his entourage toward restoring peace in Egypt?
President Morsi was elected by the Egyptians and they should be allowed to exercise their power in an election to retain or sack Morsi. The statement credited to el-Sisi that the "future of the nation is too important and sacred for maneuvers or hindrance, whatever the justifications” is self indicting, because it was the army led by el-Sisi that had embarked on questionable maneuver against the will of the people. By protesting against Morsi and the Muslim brotherhood, the Egyptians were exercising dissent and they had the right without disruption to law and order. And reports showed that the police lived up to its responsibility before the army’s intervention.