Susan Rice
Susan Rice, the national security adviser in President Barack Obama's administration may have more explanation to do concerning her statements about whether there was surveillance of Donald Trump's campaign or not. She had said that there was no surveillance of any type, before she said that she asked for unmasking of names after a surveillance and names unmasked reportedly belonged to Trump's campaign.
And just as people are thinking that Nunes may have dropped into hot water like Rice, Republicans in the house led by Speaker Paul Ryan said that Nunes' decision to step aside arose to ensure the public of seriousness that the Congress controlled house would not be impeded by the party in the investigation into the Russia's alleged interference in the election.
Though, Nunes is reported to under investigation for mishandling classified information, following his visit to the White House to share intelligence and his disclosure to the White House of what he said he had seen that the Obama administration may have truly carried surveillance of trump's campaign without discussing the matter with the House Intelligence Committee. Various civil rights group are said to have called for Nunes to investigated by the Ethics committee. 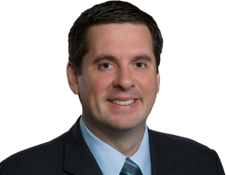 Devin Nunes
The
Schiff Praises, Democratic Party member of the House Intelligence Committee expressed satisfaction for Nunes' decision to drop the chairmanship of the committee, saying that it will help the work of the committee to continue without fears of compromise. The Republican Party has picked a new member, Michael Conaway (R-Tex.), to be assisted by Thomas J. Rooney (R-Fla) and Tray Gowdy (R-S.C).
Nunes is dancing in a hot water over investigations into Russia's alleged interference in the country's elections and consequent possible mishandling of classified documents. On the other hand, Rice is in hot water in the case of alleged wiretap raised by President Trump, which Republicans said means all sorts of surveillance acts.
The Rice issue is worrisome in that statements are being changed along the way. The first statement in a PBS interview was that there was no surveillance of any type on the trump Campaign, before the statement that she asked names in a surveillance to be unveiled to help her do her job as national security adviser, and many Democrats had said in their arguments that Rice did not break any law for asking names to be unveiled.
But curious observers are asking questions about making the first statement that there was no surveillance of any type and the other statement of unmasking names after a surveillance.
​   The Conservative media are feverishly pushing the Rice story, which the Liberal media has called a diversion from the investigation into the alleged Russia's interference in the country's election. The Liberals are pushing for investigation into Russia's alleged interference, while the Conservatives are pushing for alleged illegal surveillance of Trump and his campaign by the Obama administration.
​
NEWS AND FEATURES
News & Features Around The World