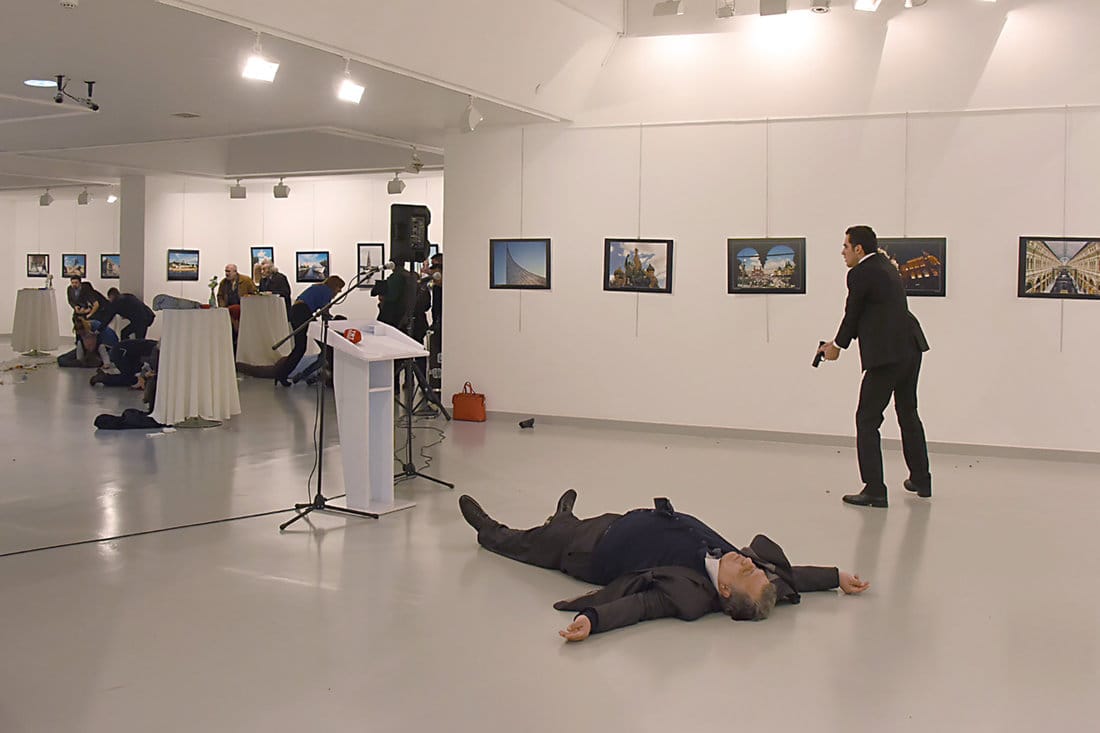 Picture shows the gun man holding a gun and the ambassador is on the floor (Courtesy:NYTimes)
The Russian Ambassador to Turkey, Andrew G. Karlov,  was kiiled  in Ankara - commando like style - on Monday.  A gun man reportedly fired a shot  that  ended the ambassador's life during an art show, while the ambassador was at the podium and the gun man came from behind.
The gun man shouted, "God is great. Dont forget Syria. Don't forget Aleppo," showing that the killing is a spill from the Syrian crisis, where Russia is knee deep at ensuring that Bashir al-Asssad is not disgraced from power.
The gun man, whose name or identity had not been disclosed, was reportedly killed in a shoot out with the law enforcement. Aside from the killed ambassador, three other attendants at the art show were reportedly wounded.
Aleppo's crisis is still in the news. The Syrian government with the help of Russia and Iran have moved to take over the city from the rebels, who have occupied the city and the only vestige left for them from the country's civil war. The protratcted efforts to save civilians from bombardment by government forces and efforts by rebels to foil the government moves to earn victory by taking over Aleppo has not fully evaporated from the news.
Just on Sunday, there were news reports that rebel set many buses on fire against the decision to use the buses to move civilians and wounded rebels away from certain areas of Aleppo. The opposiion to government moves to take over Aleppo, which manifested in the burning of buses sent to evacuate civilians, may also have manifested itself in the killing of the Russian ambassador in Turkey.