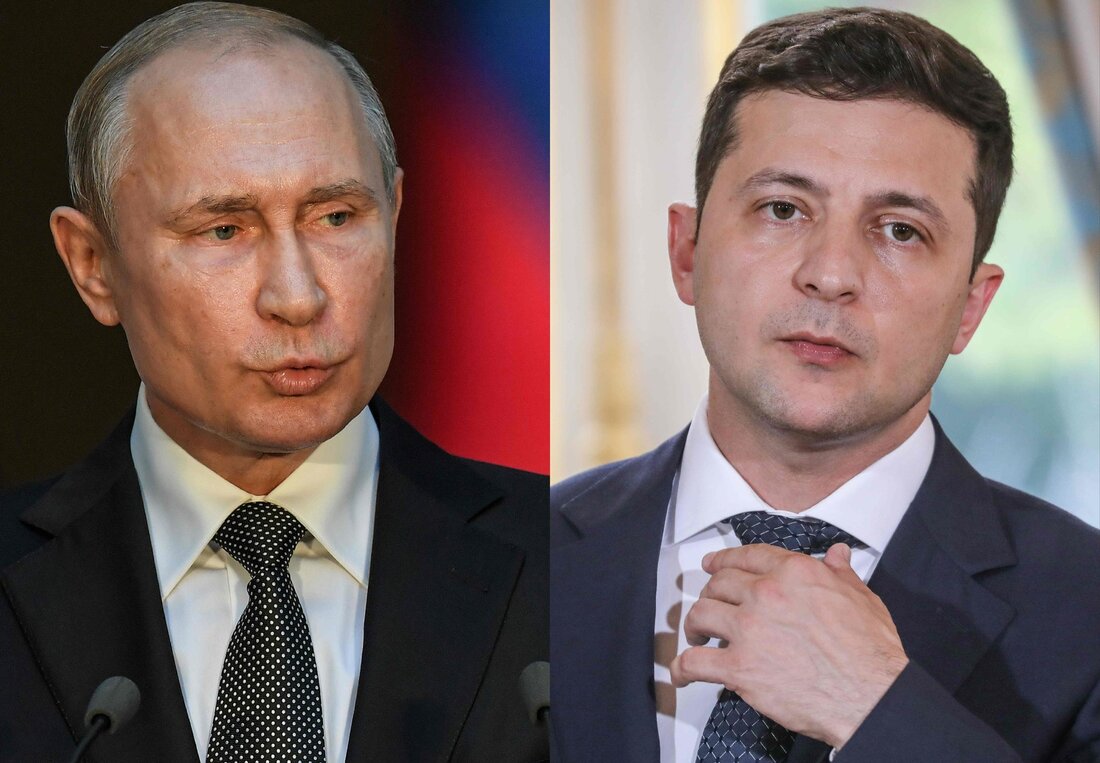 Vladimir Putin of Russia and Volodymyr Zelensky of Ukraine. Photo (Courtesy:NYTimes)
Intelligence reports in the United States indicate that Russia may be near invasion of Ukraine. Efforts by the U.S. to persuade Vladimir Putin to stop Russia's plan in Ukraine has failed to achieve. Consequently, the U.S. has alerted NATO over Russia's threat to Ukraine. Russia calls the U.S. involvement of NATO in Ukraine an existential threat.
President Volodymyr Zelensky's called for a three-way meeting with the United States and Russia. The matter has become so grave for Ukrainian leaders enough for the president's chief of staff, Andriy Yermack, to describe the situation as the life and death of Ukraine hanging in the balance.
An issue that began with Russia sending its soldiers to Ukraine's southern border had turned into a concern of wider conflict if Russia should invade Ukraine. Already, Britain has announced supplying anti-tank weapons to Ukraine.
Although Moscow has denied plans for an attack against Ukraine, however no explanation for sending troops to Ukraine's border. But a report by Reuter says Russia has given a list of demands to stop it from unspecified military action against Ukraine. The request includes banning Ukraine from ever joining NATO.
Ukraine has asked Western nations for military assistance. The recent cyberattack in Ukraine, following the failure of talks between western countries and Russia, is a cause of worry. The government has pointed a finger accusing Russia. Russia has denied involvement in cyberattacks against Ukraine.
News reports about the face-off by Russia, which the presence of its troops suggests, cite a plan by Russia to conduct a false flag operation in eastern Ukraine and will use the excuse to invade the country. But again, Moscow said such reports are unfounded information. It instead describes footage by RIA news showing armored vehicles and hardware loaded into trains in a part of Russia as an inspection drill for long-range deployments.
Experts say what is evident is a cover for units moving to Ukraine from Russia. And now, NATO has announced the intention to sign an agreement with Ukraine. The deal is said to be on closer collaboration in sharing a western military alliance, cyber, and information of malicious software.
Russia is currently describing likely NATO's presence on Ukraine's soil next to it as unacceptable, pointing to further dislocation of developments between Russia and Ukraine on one side and between Russia and western countries on the other. The Wall Street Journal, in an editorial, says Putin's actions are a declaration of war against Europe and the West.
Canada has told its citizens to vacate Ukraine. The same is likely to be applicable to other western countries that are careful in ensuring safety for their citizens. But innocent Ukrainians have nowhere to go. They have to wait in their countries and see what becomes of their lives.
Widget is loading comments...
NEWS AND FEATURES
News & Features Around The World