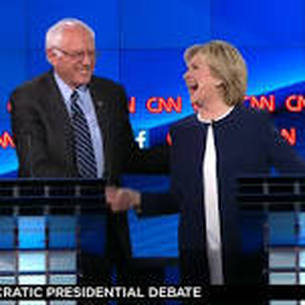 There are battles currently being fought by various presidential contenders in the early battleground states of Iowa and New Hampshire. There is a clarity in the Republican Party's various poll results that Donald Trump has upstaged Ted Cruz in Iowa, but uncertainty reigns in the Democratic party's camp. It is uncertain who is leading who, between Hillary Clinton and Bernie Sanders. Some polls are showing Hillary in the lead, while others are showing that Sanders in the lead.
The numbers one see concerning the duel between Clinton and sanders now depends on the Cable Television channel one chooses to watch.  Channels that are favorable to Clinton like the MSNBC early on Tuesday shows the national polls in which Clinton is leading Sanders with a wide margin, but one can hardly see the polls about their standing in Iowa and New Hampshire. Obviously, Sanders is clearly in the lead ahead of Clinton in New Hampshire.
The trend in these two early battleground states thus shows that for Clinton and Sanders, Iowa is the real battleground as they currently stand in polls there. If Sanders pulls through in Iowa and pulls through in News Hampshire, observers say that the situation will be dire for Clinton. At a Town House gathering on Monday, Clinton said she is still standing, in reference to a question by one of the young people in the event, about why the young people no longer trust Clinton, and why they are not with her the way they are currently routing for Sanders.
Clinton answered by saying that she has been in the vanguard in defense of equality for about forty years and that she has started as young as the young man's age and that she is standing no matter what may be happening. She believes there are young people routing for her just like the young man is routing for someone else and not her. At a related event, a woman told a story that she earns $10,000 annually working for Walmart and expressed agony about her struggle to pay bills and makes ends meet.
The MSNBC fails to show whatever Sanders' may have said in response to the woman's revelation, but the anchor nonetheless said that Sanders' response is why he will not get to the next level.. What has Sanders said in response to the woman's revelation that would not allow him to the next level and what is the next level? The omission by the anchor for not airing Sander's response left the viewer in confusion. The advertisement that was aired instead of airing Sanders' response to women's revelation made that part of the information inconclusive and left the viewer searching for what Sanders' may have said.   This is what I have from the archive about Sanders' reaction to the woman's statement “It is not easy for people to stand up and say that. But the truth is that until millions of people that are experiencing exactly what you guys are experiencing do say that, we don’t make change. So, I thank you for saying and for telling us what’s going on in your lives. Because the truth is you can’t make it on $12,000, you can’t live in dignity on $10,000 or less.”
Wherever the reason the MSNBC's anchor injected her own opinion into the story is unclear, instead of giving the viewers the true version of Sanders' words and allow viewers make up their mind, whether or not Sanders could make it to the next level, because of his words. And that is saying that various television stations with different ideological and political flavor would be of great help to allow the voters decide the fate of these politicians seeking their votes.