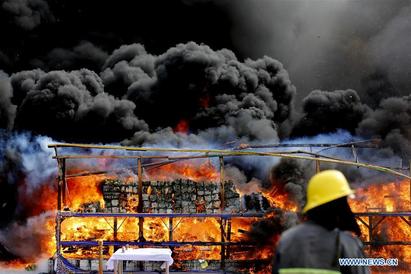 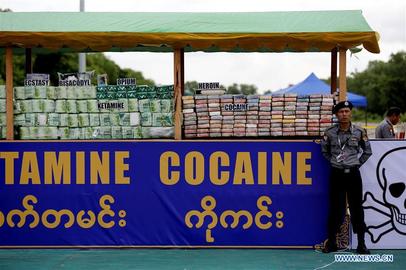 Seized drugs on display
It is believed  all over the world that drugs and abuse of drugs have assumed so much dimension and have attracted the attention of authorities as a serious cause for concern.
According to the UN, about 190,000 people die every year from illicit drugs. The statement said that the damage visited upon lives and communities does not stop there. Drug use damages health in the form of debilitating HIV, hepatitis and tuberculosis, while drug trafficking nourishes money laundering, and deadly terrorism. And that corruption, the great enabler of organized crime, exists throughout the drug supply chain.
There are stories of drug abuse and drug hulls all over the world. Just as the society struggles to nix drug abuse, so are drug dealers making efforts to continue uninhibited drug hulls.
It is noted that drug abuse inhibits the drive toward a healthy and crime free society. During the ceremony in Nyanmar to mark the drug abuse prevention, authorities called on people to listen to the concern and need of youths and support healthy development. It is noted in the statement delivered by the Home Affairs minister, Kyaw Swe, that students need to be educated at early age on the need for drug prevention.
A statement on presidential proclamation on National Substance Abuse Prevention in 2015 in the United States says, "Alcohol and drug use can stand in the way of academic achievement, jeopardize school safety, and limit a young person's possibilities. Additionally, thousands of Americans die each year from prescription drug overdose -- and many can access these drugs in their own medicine cabinets at home. We must educate our children about the harms and risks associated with substance abuse. By talking with our sons and daughters early and often about the dangers of drug and alcohol use, we can help set them firmly on a path toward a brighter future."
Cocaine is not a prescription drug, cocaine is not a prescription drug, Ecstasy is not a prescription drug, Bisacodyl is not a prescription drug and Opium is not. Many people are saying that most of the drugs being abused mostly by young people are not prescription drugs.
It should also be noted that one major worry expressed by President Donald Trump against free border crossing or open border between Mexico and the U.S. is the amount of drugs that cross with the humans, which he said endangers the youths of the U.S., and the reason he has insisted on building a wall at the border to check not just the illegal free human movement into the U.S, but also the menace that drugs have constituted in the U.S.
All over the U.S. there is general education to students from the elementary level about the danger that drug abuse constitutes to the society, because of the worrisome epidemic of the problem among youths. Authorities here don't wait till drug abuse prevention day to make promises. They are on duty at all times telling the young stars to say "No" to drugs.
NEWS AND FEATURES
News & Features Around The World