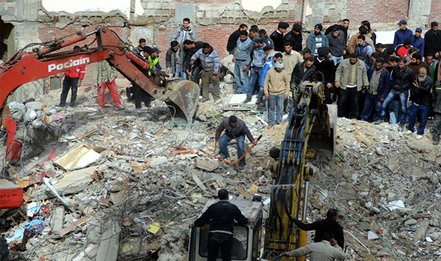 A house recently collapsed in Egypt and killed 25. A housing commissioner in
the country said more houses may be facing the same fate for lack of
oversight in building plans.
A survey shows that It isn't in Egypt alone that the world faces a problem of
oversight at ensuring good infrastructural plans for houses that are supposed to
be safe for human habitation.
In Ghana, a house recently collapsed in November 2012, killed about 18
people and injured scores. Authorities blamed faulty construction and bad
foundation work for the collapse.
In November 2012, a house collapsed in Lagos, killed two graduate sisters
and left their mother in coma. The building reportedly showed cracks and
began to sink before its collapse, newspaper reports reveal. Earlier in January,
a building in the same city collapsed while under repairs and killed over six
people.
Following the collapse of the first building in Lagos, the state government
carried out what it called an 'integrity test' on the houses in the same estate,
where two graduate sisters were killed and found 50 houses unfit for habitation.
But the problem the government contend was how to resettle residents and pay
insurance to affected residents.
On October 30 2011, New York Times reported a house under construction in
the Bronx that collapsed and killed a construction worker buried under six feet
of brick.
In another development, 4 New York of NBC reported the collapse of another
building in Brooklyn on a Tuesday afternoon killing a construction worker
trapped under the rubble.
In Queen’s borough, a party ended when a building’s third floor collapsed, and
the City Council issued what it called full vacate order while the cause was
under investigation.
In February 2012, a Canadian Mississauga 70 year old house suddenly
collapsed while under renovation, but no one was injured, the CBC of Toronto
reported.
In November 1999, an apartment building collapsed in southern Italy and killed
more than 34 people. In November 2010 The Independent reported that
commentators and opposition politicians accused Italian government of neglect
and mismanagement over the collapse of a 2000 year old House of the Gladiators.
Five people were killed when a building under construction collapsed in the
Russian City of Tagarong.
Three people were reported missing when a Cologne six story archive building
rumbled and collapsed into a pile of rubble.
In August 2012 four people died and five others injured when a fire brigade
office under construction collapsed in Guangzhou, capital of South China’s
Guangdong province, reported by ChinaDaily.com
Another three people died when a house collapsed in south west China’s
Yunnan province.
Among recent houses that had collapsed around the world the number of the
dead in Egypt tops the chart of casualties. The number of casualties in Italy (34)
in 1999 tops the overall list.
A building technician who doesn't want his name in print attributes house
collapse to several factors. Among them, for example, are lack of oversight in
building plans and carelessness by carpenters who may have missed applying
exact number of nails to a beam. Another reason, according to The Mail Online,
in a report about a house that collapsed  in the UK, is adding extension(s) not in
the plan initially.
NEWS AND FEATURES
News & Features Around The World