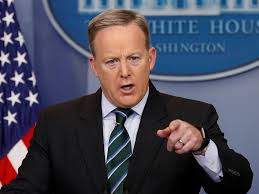 Sean Spicer has ceased to be the White House Press Secretary. Spicer bows out of office with a shocking resignation on Friday, over what reliable information tied to an appointment of a new White House communication director.
The reason Spicer decided to walk out of his job so suddenly over an appointment of a communications director is not very clear. But sources said that Spicer preferred reporting directly to the president than reporting to the communication director.
Spicer will be remembered as a press secretary, who came to office faced with the unfriendly media bias against President Donald Trump, which directly meant he himself accepted office in a war situation with the media. His combative nature fitted the nature the office required at the time of his appointment.
Spicer was much more in the news as a fighter, who worked and kept the White House safe, from seemingly unfriendly media coverage and leaks. He had his pluses and minuses as his time as press secretary is already being analysed by the media.
Others will see his fallout over a new appointment by the president as a disarray in the presidency, or  that Trump is possibly shaking up the communications department for the department to ally with new challenges in the president's need in his square with a section of the media that he has labeled 'fake news'. In the current political atmosphere, in which the president is always in battle with enemies all over the place, no one should expect the communication machinery to be permanent. Time to time shifts cannot be unexpected.
Spicer has left, but the White House is intact. His departure has not shown that the White House is in any form of trouble. A new communications director, Anthony Scararmucci, is said to have resumed office. However,  in between, opponents of the administration will see the disagreement between the president and Spicer over the appointment of a new communication director as a sign of trouble for the president.
NEWS AND FEATURES
News & Features Around The World