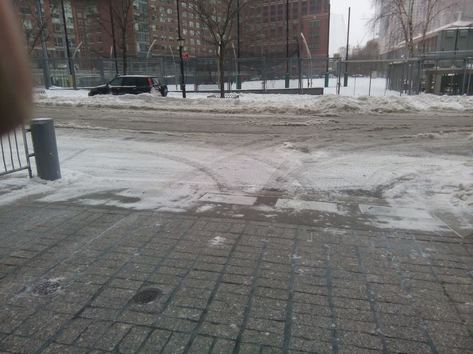 An area that has been redeemed from the impact of the snowfall by Tuesday afternoon.
No one will believe how Tuesday's massive snowfall has transformed the North East of the United States, confirming life as an adventure, where nothing is permanent, including human conditions.
​   The roads are deserted and it does not look like an area inhabited by humans, save that many of the structures are still recognizable. Everywhere is white in a blanket of avalanche of snowfall.
Some areas have as much as two feet of snow accumulation, while some areas that have been expected to have as much, have between four and eight inches, far below the prediction of between 12 and 18 inches.
Governor Andrew Cuomo of New York State said in a statement monitored on a radio that no one has any reason to be out on the street. He said the airports are closed, schools are closed and no one is at work. The governor's statement cannot be far from the truth, if it is not completely the truth.
Sure, it is dangerous to be outside  there on the street. A young man described his experience as scary, riding the D Train from the Bronx Borough. He said the train ran underground and he was able to make a connection at Broadway-Lafayette to the E Train to get to his destination at Downtown Manhattan about 09:00 am. He said the wind came after him and not only after him, but after everyone on the street. He said people held to the rails to avoid the ferocious wind's impact, and that when you thought you were safe, the rain accompanied by ice was joined by unexpected marathon of thunder.
Yes, schools, airports and office and stores have been closed and no one is ready to venture outside to see the whiteness and embrace the accompanying coldness. Moreover, prediction about the snowfall was something like it would Armageddon. But some people among emergency service workers said that they were lucky to get the train ride to work early in the morning, because the train from their areas ran underground. The state had shut all trains running on surface ground and bridges before Tuesday morning, for the fear of the unknown.
When you live in this environment, the first lesson is that when there is a massive snowfall like the type of Tuesday as it was really massive in some areas, the preference will be to stay indoor, unless there is transportation to commute to work. For car owners, it entails to first dig out the car from the trap of snow and not a small work that anyone would like to undertake in a hurry.
Yet, it is better to dig out the car early, before the snow around the tyres and the roof will turn into solid ice, capable of making the digging twice harder. A recent car owner will learn that there is a need to acquire a spade to dig snow around the tyres and a stick that has a brush and a rubber top, to help in clearing accumulated snow from the windscreen and other parts of the car's body.
Now, driving all the way from whatever point of departure through a lonely road to your destination represents a new experience. Whether you live in New Jersey or Up State New York or Westchester or Long Island, there is no much difference than that you may find that your vehicle is either alone on the road or you have a couple of other vehicles snailing like you are doing on a slippery road. In this condition, no one needs the speed limit regulation to drive slowly. The slippery snowy surface determines your speed.
When eventually, you are able to make it to your destination, after driving through the a tunnel, if you are coming from to New York from New Jersey, and not seeing any vehicle ahead or behind you, you will have no choice than shout "Hallelujah!" Of course, the snow accumulation will be removed and life will continue, as if nothing near calamity to human experience here on Tuesday.
NEWS AND FEATURES
News & Features Around The World