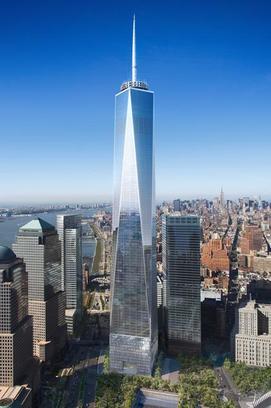 The new World Trade Center in New York City is sure to pull a large crowd this weekend
Two police horse carriages, each carrying two horses, pulled across busy streets, navigating through the Murray and West Street without jeopardizing traffic rules. It is about the rule of law and strict adherence to the rule of law, without respect of persons and positions.
But when the horse carriages block an entrance to a private property, a security officer calls the attention of one of the drivers to not pack and block the property's entrance. The driver of one of the horse carriages takes an offense and speaks to the security officer in an unfriendly manner.
"What do you think he wants to do with the way he has just spoken," the guard asks a colleague. "May be he wants to effect your arrest or issue you a ticket for obstructing the administration of service. Remember that you can easily be issued a ticket or be arrested or indicted, because you are not above the law, unlike some powerful politicians," the guard's colleague interjected.
The horse carriage driver is doing what anyone will regard as a sacred duty and the security officer is believably doing what he is paid to do. Of course, the horse carriages quickly pull away as soon as the traffic bottleneck eases. Many more appearances of police vehicles with sirens and police officers in full ceremonial regalia prompts questions and a desire to know about what is happening and an answer from someone who knows says that the police is preparing for a procession for the beginning of the September 11, 2016, memorial.
"I have to get two minutes video and a footage of the police procession," the reporter in me says after confirming the reason for the police and other military personnel's heavy presence around Murray and 200 West Street near the World Trade Center. After we have waited for about two hours and the police procession is yet to appear on the street, someone moots a suggests that it is possible that the police procession will go through Vesey Street and past the 'Brookfield Place'. Interested observers are worried that the police procession said to be coming about 12:30 at noon is yet to appear at about 03:00 pm.
"It is possible that the procession will take place near the evening period," the reporter suggests based on his past experience of having stumbled on such a procession in the past. Meanwhile, the sky is getting dark at noon, and meaning that it might rain before evening. Anyway, it is getting too late and the police procession has not appeared on the street. The reporter decides to forfeit an opportunity to get a video and footage for more news worthy events until Saturday or Sunday, when he hopes to be around the World Trade Center and the Brookfield Place. Yes, it seems to him a ground breaking and news worthy event that the 2016 September 11 memorial will be on Sunday.
The records show that it is the third time that the memorial day will be observed on Sunday. The first September 11 memorial observed on Sunday was in 2005; the second memorial on Sunday was 2011 and now, another Sunday September 11 memorial is this Sunday. This weekend, the Downtown Manhattan will witness police sirens blaring like musical notes. Important dignitaries will visit and notable speeches made about the sad and the sweet memorials, amid handshakes and promises to limit the terrorists. Side street talks have revealed that about three hundred motor bike riders are expected on Saturday.
The two major presidential candidates will make remarks on how to fight terrorism and to ensure no repetition of September 11 on American land. They are already busy doing that, talking about how to identify bad guys among Syrian Refugees or about how  just to bring them in, careless about the bad guys, since some people believe that love and the need to be stronger together outweighs the need to be smart and outsmart the Islamic State guys.
Everyone knows that America is the home of the brave and land of the free, swarming with love and people with a lot of potentials, but that that does not mean that America does not have its own version of Libya, an entry point to Europe for unwanted immigrants, which Mexico represents West of the United States. In spite of all the dangers that a whole lot of of undocumented immigrants have mixed up with the rank and file of the good people here, some politicians are preaching love and togetherness. They wanted Americans to be like Jesus Christ and give their lives for others to live!
It is why any time this memorial falls on Sunday, it reminds one of the sacrificial love of Christ. However, the question remains about whether or not all Americans will like ape Christ, when it is known that Christ's immediate disciples themselves could not before the visitation of  the Holy Spirit.And it is not certain, with the ways people live these days, in which anyone can do what pleases him or her without any shame, that the Holy Spirit, the type seen on the day of Pentecost, can come among us and turn us to be like Christ disciples who begin to live like their master after receiving the Holy Spirit, and certainly not in an environment of lies, cover ups and respect of persons and positions.
NEWS AND FEATURES
News & Features Around The World