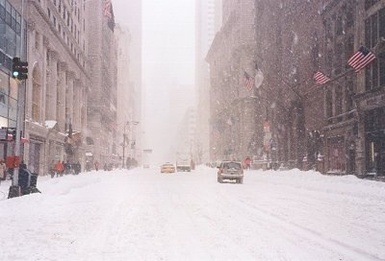 It was rough in New York City on Monday as a result of excessive snowfall through Sunday night into Monday. But before Monday snow headache on the streets, New Yorkers like other people in the United States had savored the Sunday's Super Bowl with New England Patriots victory over Seattle Seahawks, 28 -24, at Glendale in Arizona. Soon, after the Super Bowl, the calculation by North East residents, about how to beat the weather on Monday, began.
This reporter stepped out aware of the weather situation. But when he reached the lobby of the apartment, he discovered outside there was rain and ice coming down with the snow. He stepped back inside for an umbrella. He discovered again in the lobby the umbrella was not in good condition, and threw it into the garbage ramp. He went for another umbrella and set out on a journey, which he later discovered was one of the toughest he had in recent time and the roads the roughest.
The sidewalk was no place to walk. Snow mixed with slush water, and most building supers were still not out to clear the sidewalks. Street corners had deep slush water and there was no way of navigating the corners without dipping feet inside freezing cold slush water. The option became to walk on the road itself. Many people turned to walking on the roads than on the sidewalks. At a point, one found himself forced back to the sidewalk, because some motorists seemed to lack the decency of driving slowly.
A city plower that drove past drenched passerby on the street with water. While you navigate the sidewalks, after running off the road to avoid some motorists' carelessness,you encounter children on the way to school and accompanied by a man who appeared like their guardian. The children walked in the snow unready to give way. Their guardian noticed the difficulty the slush water on the sidewalk posed to the children, and apologized to the adult as they passed each other.
On arrival at the train station, a discovery that he had expended 30 minutes on a journey from home that usually took seven minutes shocked him. He realized the big trouble caused by the snow. He remembered just a week ago the snow caused a clampdown on travel by the State and City officials. He thought about how schools were closed along with statewide ban on travel.  But the snowfall was just six inches in comparison to the 24 to 36 inches that was forecasted. On this Monday, State and City Officials dared not interfere.
Everyone is free to travel. Schools not shut. It is the kind of day that requires schools to be shut. How can anyone allow children to navigate their ways to school on these roads? In the subway, the crowd of straphangers was unlike any other day. When the train arrived, it was already fully packed. There was hardly space for one to squeeze into, but everyone going to work wants to make it and squeeze they have to. It was like a journey to hell. A child in that crowd in the train was heard being persuaded by her mum that they will soon get to their destination and she should take it easy.
At a point, the train conductor announced that the train was no longer going on an express route, but would divert to the local route. People said wherever the train was going, they would go, and that it would only cost them walking blocks to get back to the East. A woman began to plead for a seat, because she said she had a bad foot and could no longer stand on her feet. Another woman began to mutter expletives to no one in particular that she paid for the train ride; she had the right to be comfortable in the train and she did not expect anyone to stand on her back.
As she traded her expletives to no one in particular, people wondered what may have gone wrong with her, because she was so loud and did not appear to want to stop. But when she opened her eyeballs, turned to a man behind her and said she was talking to the man and that the man did not have to make her ride uncomfortable, people said she may have have forgotten to take her medication before setting out of the day.
Virtually everyone agreed that the forecast for Monday's weather and snowfall was perfect, unlike last week's blunder. And that last week's blunder affected how Monday's slush would have been managed. But on arrival at business districts in the city, how the sidewalks had been cleared of the slush showed that by the time building supers in residential areas wake to see the mess on their sidewalks, they would get to work, and that by the time workers would be returning home, comfort would have been restored on their journey.
NEWS AND FEATURES
News & Features Around The World