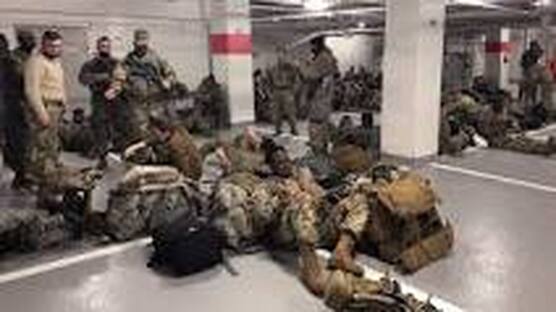 The news of the instruction to members of the National Guard drafted to keep law and order in Washington for President Joseph Biden's ​inauguration to leave the Capitol without a provision for a place for them to stay other down the bowel of the biting cold is a reminder of soldier's Home by Ernest Hemingway, the problem of serving your country, and at times some end up with the Post Traumatic Stress Disorder, PTSD.
This again shows the failure of leadership by the Congressional leaders. They have failed managing the Donald Trump protesters' protest and pushing the responsibility on the former president. The White House new press secretary, Jen Psaki, said that the matter of the guard's treatment has reached President Biden and because the president's son has served, the president has spoken to the head of the National Guard. No more.
Does the president son needs to have served for the president to intervene at ensuring members of the National Guard are treated with dignity, or when does the president's son service becomes a precondition for members of the National Guard to be treated with dignity?
Already, this development has prompted people asking why in the first place are so many members of the National Guard in Washington and other state Capitols? Was it prompted by the sense of insecurity arising for the Trump's supporters storming of the Capitol on January 6?
People are generally in shock to see members of the National Guard in new York City, battle ready, and standing at the entrance of straphangers' way out of the train station. Information that these members of the National Guard will be on the street for the next two or three months is making people angry, not against members of the National Guard, but against leadership's indiscretion for ordering as many as 25,000 guards on the street at a peace time.
Hearing that the guards have been ordered of the Capitol and that they are left to be in the cold brings the memory of Hemingway's story about Kreb in Soldiers' Home, who acted like a stranger in human community after arriving from battle, for no fault of his but suffering from an undisclosed health issues. How would they not become candidates of PTSD considering the condition they live while fighting for their country, when at times left to survive in dangerous circumstance, because those who are charged with responsibility for their care fail to act.
The incidence that these guards are facing in Washington does not portray a leadership That is ready to accord anyone the the much mouthed human dignity. The treatment of those guards has shown that words are indeed different from action, that it is easy to talk but difficult to perform the talk in action.