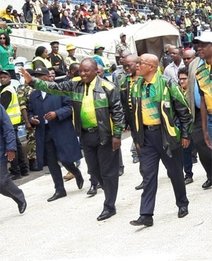 Cyrial Ramphosa andPresident Jacob Zuma (Photo: News24)
President Jacob Zuma and the other memebrs of the ANC, rolled out drums on Sunday, celebrating the party's 105 years existence. Wearing the party's colors atop black pants, Zuma and Deputy President Cyril Ramaphosa, filed out at the Orlando Stadium, Johannesburg, calling on South Africans, to rally round the party.
"We must give our people hope and unite against our common enemies which are unemployment, inequality and poverty, and not against one another," Zuma said, according to a report by News24.
Zuma's remarks is believed to be informed by harsh criticisms against his government within the ANC, concerning the level of corruption in his government. And reports shows that Zuma's statement indicates that the party is plagued by "serious challenges to its unity threatening its position as leader of society." 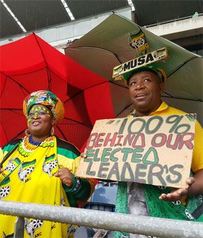 ANC supporters, who throw their support behind the party's elected leaders.
​    Undeniably, there are members of the ANC who wants the attack on Zuma to stop, and they also want him to run for another term against what has been popular demand for him to step down, becuase of what observers have called the negative effect of his government on the ANC's image as a political party.
Just as there members of ANC who want Zuma to continue until 2019, there are others who say that they believe that their destiny is tied to the ANC as the party that has liberated them from apartheid, but they speak about their worry concerning the current leadership of the party.
The people who want change say they are the youths and they appeal to those leaving the party to join the opposition to return want a change in the top hierachy of the party. Ironically, Zuma believes that the problem confroting the ANC is about factionalism.
The ANC was formed  on January 8 1912 by Saul Msane, Josiah Gumede, John Dube, Pixley ka Isaka Seme and Sol Platje along with other chiefs, people's representatives, and other prominent individuals, to unite all Africans as aone people for the defense of their rights and freedom, according to Wikipedia.
NEWS AND FEATURES
News & Features Around The World