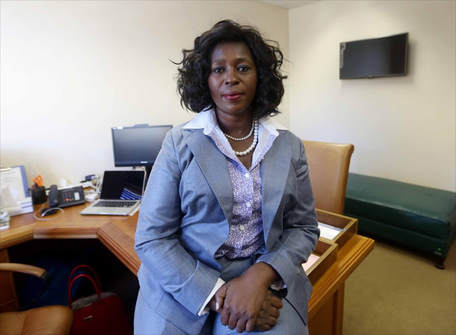 Makhosi Khoza
Makhosi Khoza, one of the ANC's member of parliament from KwaZulu-Natal, who openly supported a vote of no confidence against Jacob Zuma, has resigned from the party.
"I want to say goodbye to the new alien and corrupt ANC," she said at a media briefing, announcing her departure from the party.
For about two weeks, the party pressed her to attend a public interview for a disciplinary action for her actions, which the party said brought disrepute to the party, because of her incessant criticisms of Zuma in the public glare.
For about two weeks, the relationship between the party and Khoza assumed a cat and mouse dimension, as she refused to attend a public interview organized by the party toward a disciplinary action against her. She had said that scheduling a disciplinary hearing interview on a Sunday negated officialdom, and she expressed fears for the safety of her life and did not attend.       The interview sitting was postponed and rescheduled on two occasions, became a legal issue but to no avail until she decidedly walked of the party with her conscience, refusing to be forced to toe the party lines.
Her resignation from the party over a week ago  was not a surprise to political observers, but more of an event that exposed the ANC as forcing elected members on its platform to follow its dictates than relying on their conscience. It was also clear that Khoza's trouble was unconnected with her statement to her colleagues in the parliament asking them to vote based on their conscience than follow party's dictation. She did not conceal her position that it was time to take South Africa back from the current direction and that by openly sanctioning the ANC will be the way to do it.
This was also reflected in her resignation speech. "It is with heavy heart that I have decided to leave the ANC as the party no longer is the one that I know. ANC is the new alien and corrupt."
Khoza said that the ANC has been hijacked by an alien with corrupt nature. She publicly reject the leaders, but said not the members of the party. She vows not to leave her DA and the party's mission, insisting there is a difference between the party's values and that of its leaders. She said she disagrees with some party members that the party can be self-correct.
Observers believe that Khoza's sin against the ANC's leadership is her support for the no confidence vote on Zuma, against the party's use of her incessant criticism of Zuma as excuse. It is believed that she was openly defiant for altruism reasons and the ANC will need more of her caliber to convince voters it is till relevant in the scheme of things for it to continue to be the ruling party.
Click to set custom HTML
Comment Form is loading comments...
NEWS AND FEATURES
News & Features Around The World