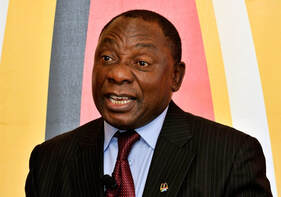 President Cyril Ramaphosa of South Africa, now AU leader.
President Cyril Ramaphosa of South Africa is new leader for the African Union, AU. He succeeds Abdel Fattah el-Sisi of Egypt, in the just concluded AU summit in Ethiopia.
News reports say that Ramaphosa's speech at the summit centers on a continent that is prosperous and at peace with itself, against recent development in his own country, South Africa.
Observers say that it is manifest that African countries are not at war against themselves, but that the talk about a continent that is prosperous raises eyebrows and fact checking does not show Africa as a continent that is prosperous.
A sharp reminder of Ramaphosa's emergence as leader of AU is the issue of Xenophobia in South Africa that has put the lives and businesses of other African nationals in that country in the danger of destruction. The development has shown that South Africa was not under the rule of law or that some South Africans resorted to brigandage that threatened the rule of law in the country.
The excuse that some foreign nationals involvement in avoidable questionable lifestyle and crimes in that country have caused the violence against them and their businesses has been rejected since the rule of law is sufficient to address such accusations. People have said that unless the South African government has failed to do its job of employing the rule of law and ensuring protection of lives and properties of migrants in the country.
However, it is expected that with the emergence of Ramaphosa as AU leader that he will use his good office to call South African citizens to the existence of law in the country, and that it is criminal to unleash violence on migrants for any reason that calls for the application of the rule of law.
There has been an uproar over the sudden emergence of Xenophobia in South Africa and the country's seeming helplessness to properly address the issue. Up to this moment, the world does not know about South Africans arrested and convicted for killing and destroying businesses of those they regarded as others among them.
An interview with a South African woman in New York at the heat of the Xenophobia attack showed jealousy against migrants successes in their businesses and their ability to seduce South African women with their demonstration of love that many South African men deprived their women as the cause of the attack on migrants and their businesses.
It will be a shame for the AU, if Xenophobia is allowed to rare its ugly head again in South Africa, with Ramaphosa as AU's leader. It is why Ramaphosa has a larger than life responsibility to ensure peace for migrants in his country.
​
NEWS AND FEATURES
News & Features Around The World