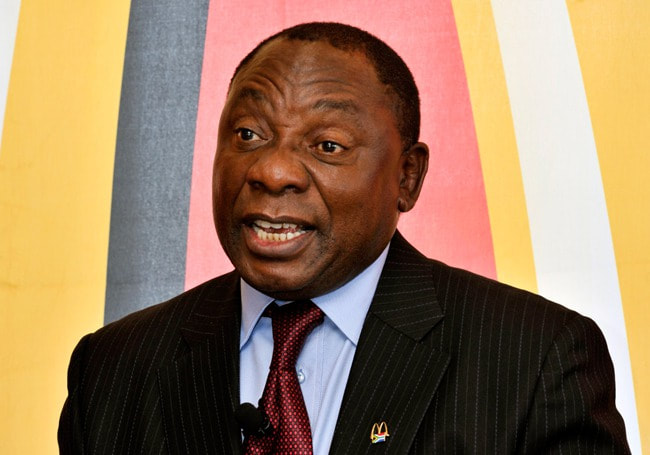 President Cyril Ramaphosa of South Africa
Some People are saying that President Cyril Ramaphosa of South Africa has apologized for the callous treatment of immigrants in South Africa in attempts to close the chapter of 'man inhumanity to man'  visited on unprotected immigrants.
However, curious observers say that apologies by Ramaphosa and other South Africans is not enough. They contend that apologies cannot replace loss of lives and materials in arson by angry South Africans.
It is noted that it should not be misplaced that South Africans who went after innocent immigrants were angry and that they visited their anger on the wrong people, instead of confronting Ramaphosa and other aimless leaders of their country.
New reports have shown that people have placed the blame for evil attack on immigrants in South Africa on Xenophobia - dislike of or prejudice against people from other countries.. But people who can see beyond their nostrils are putting responsibility for the evil development in South Africa on bad governance, and that South African leaders are not only insular, but that they are also incompetent, and that the leadership's incompetence laid the foundation for the South Africans's anger that led to the dislike of or the prejudice against the immigrants.
First, South that was thought all along to be under the rule of law! Wrong. People outside South Africa were unaware was that the country had slipped into chaos with  the rule of law in abeyance and that the rule of the mob had taken over until the news reports emerged about the attack on immigrants. What were the leaders doing and could not wade in with all their powers to ensure maximum security for defenseless immigrants?
Does it mean that South Africa lack competent police and army to maintain law and order? If the country has capable police and army, why have the leaders not ensure maximum security for the defenseless immigrants by using the police and the army to the maximum level possible, and why didn't the leaders call out the national guard to arms, for the defense of the immigrants? People with knowledge how countries are managed under the rule of law have asked.
They say that Xenophobia should not arise in a country under the rule of law, because such an act would be severely punished to discourage it. They say further that it is the leadership's responsibility to ensure that such act does not become everyday occurrence enough to result in evacuation of foreigners without the government calling out law enforcement to ensure total protection of affected legal immigrants...
That South Africans have forgotten the history of immigration in Africa that those they call immigrants against whom they have been waging a sense war may actually have their forefathers from South Africa travel during early immigration in the continent to wherever they call home outside South Africa? Mobsters seen on television screen attacking immigrants and setting immigrants properties on fire have been pushed to the extreme by the incompetence of their leaders to provide jobs and economic viability. They had thought wrongly their jobs had been taken away by foreigners unknown to them that their leaders had failed to create necessary jobs to ensure their employment. .
What should one expect of any country, where unemployment rate is at 28 percent and nothing to show that leaders in the country have worked to bring down the run away unemployment number with explanation to the public that foreigners are not responsible for the unemployment situation in the country?
People are saying that calling for the punishment of South Africa is a right thing to do. But they say the bucks stop with the leaders and not the country as an entity. They say calling for the punishment of the country is a way to allow those leaders to escape responsibility for their incompetence and inaction. Just as it is true that some African leaders are responsible for the woes of their citizens in South Africa for traveling far away from home because of failure to prioritize development programs at home toward full with employment that will ensure provision for the needs of increasing population and stem the tide of immigration at all cost. And that yet, that is no excuse for any country to allow mobs to go after defenseless immigrants.
They say this is where the culpability of the South African leaders is most pronounced: Inability to provide for the population at home and allowing excessive immigration from other countries that further choked opportunities at home, and rather than addressing and working hard to tackle the 28 percent of unemployment in the country, they were busy partying and after the parties, they went to bed..
How Ramaphosi is able to close his eyes in bed with the unemployment in the country at 28 percent is beyond imagination. Rather than call the country's law enforcement to arms on hearing about attacks on immigrants, he went on defensive and end up in utter confusion. .
Unfortunately, there is no way Ramaphosa can detach himself and other leaders in that enclave from the stigma of being insular and incompetent, if Bill Clinton's history as an insular leader has been published in a textbook "Public Policy - Theories, Concepts and Models of Public Policy Making" by Thomas Birkland, for closing his eyes while thousands of Rwandas became victims of senseless killing in their own country,
If Clinton's known good leadership in the United States of his time has not stopped that part of his leadership credential from going on record, nothing could abridge Ramaphosa and other South African leaders incompetence and inaction, and blurring the country's pride vanish into the thin air from record...