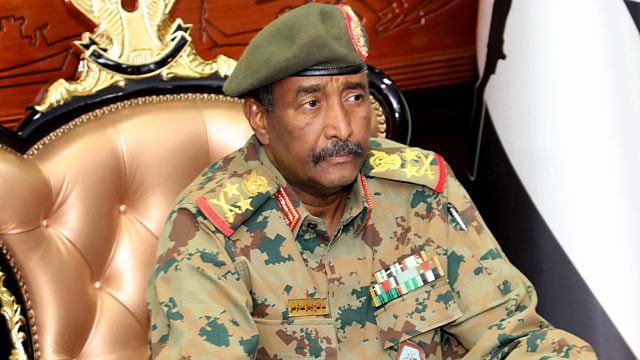 Abdel Fatttah al-Burham, Sudan's new strongman.
A call for civil disobedience in Sudan by the civil society that  begins Sunday and expects to end, when a civilian government is announced is in effect, prolonging the disagreement between the military rulers and the civil society over the country's rulership.
Although, the military had overthrown the country's former leader, Omar al-Bashir in April, but the civil society refused to stop its call and protests for democratization of the country against the military's plans to hold on to power.
Consequently, the military has continued its killing of protesters who have refused to decamp from the spot they have occupied since the days of their successful protests against al-Bashir. On June 3, about 100 protesters were confirmed killed by soldiers, and that had pushed the country to an edge and the resultant call by the civil society's for an indefinite strike capable of forcing the military out of power.
Businesses in Khartoum and other cities in the country are reported shut on Monday, continuing from the Sunday paralysis following the civil society's call for a strike by Sudanese Professionals Association, SPA. There are Sudanese workers who say they will not go back to work until the SPA calls them back to work, according to news reports.
Just as the SPA says that response to its call for strike has exceeded its expectation, many observers in and outside Sudan have continued to wonder how protesters have managed to force the overthrow al-Bashir and has continued to make the military uncomfortable in the choice of the military to remain in office than allow the democratization of the country.
Many observers are saying that the Sudanese civil society's efforts and its results at unseating al-Bahir and successfully calling the shots against his successors are teachable moments for many other civil societies in some African countries. There is undeniable hope that things may turn out right for Sudan notwithstanding that the country is still on the edge.
By the nature of the civil society's call for an indefinite strike, it means expectation of an end of the military government. How the military government perceives the development is yet to be reported, other than it says the civil society caused the problem that led to its crackdown, accusing the civil society of creating blockades on the roads, which it described as breaking the law.