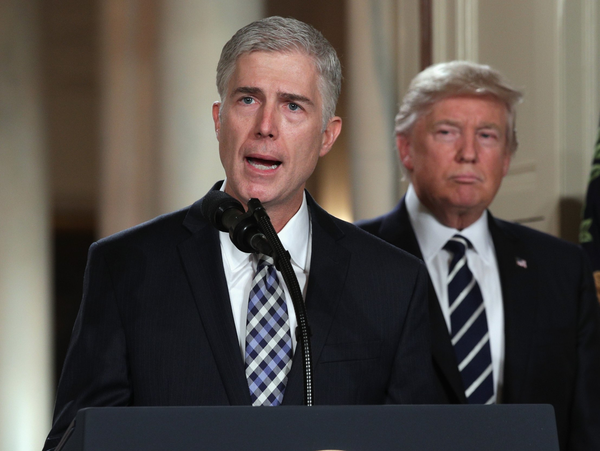 Neil Gorsuch and President Trump on Tuesday, during the announcement of Gorsuch's pick.
The denial of Merrick Garland by the Republican law maker for the Supreme Court is haunting Neil Gorsuch, President Donald Trump's pick for the same court.
Obviously, the Democrats have chosen to play 'eye for an eye' politics, because the Republican law makers refused to consider Garland for hearing late last year.
Additionally, the ban on refugees and the eventual sacking of Sally Yates, the acting attorney general, by President Trump, seem to have worsen the relationship between the Democratic Party law makers and the president.
The Democratic Party law makers have vowed to form a block of defiance to everything Trump. Both Garland Yates were  former President Barack Obama's nominees.
But the Republican law makers did not give Garland any chance at all last year, when he was presented for confirmation by president Obama, saying that the next Supreme Court pick be better left for the incoming president. However, at that time, it was not known, whether Hillary Clinton or Donald Trump would win the election. Unfortunately, some Democratic Party law makers are reportedly referring to the seat Gorsuch has been nominated to occupy as Garland;s stolen seat.
Senator Charles Schumer has reportedly said that the Republican Party will require 60 votes to get Gorsuch's confirmation. He insists that it is what some of the Democratic Party law makers have asked for. But the Republican Party members are saying that if the worst comes to the worst, they would resort to the 'Nuclear Option' to get Gorsuch through the confirmation process.
NEWS AND FEATURES
News & Features Around The World