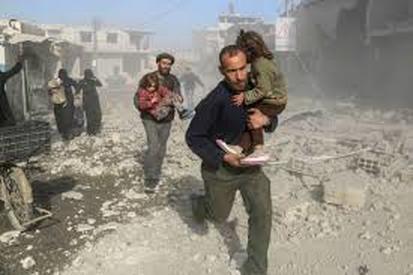 Men fleeing wreckage with children in their arms
The United Nations' Security Council voted unanimously on Saturday for 30-day ceasefire in the Syrian war. The ceasefire does not mean an end to the infanticide among siblings in that country, over who should rule the country and the type of political system most appropriate for the country.
The ceasefire does not mean an end to the killings and upending of normal human life, because it is not the first ceasefire, which beginning has witnessed bloodletting. No one is sure whether an end is in sight or not. And just before the latest ceasefire announcement, there have been endless echoes of pains and anguish from Syria.
The latest cries of pain and anguish, according to the BBC in a new featured video taped report about the war in Syria arises from the attack on Eastern Ghouta, where children like adults have been caught in mayhem of the bitter war, a quick reminder about a vivid description of war as a 'Red Animal' in Red Badge of Courage by Stephen Crane, a psychological study a young soldier's struggle with the horrors of war.
One can see the 'Red Animal' moving around in Syria for as long as the war has lasted maiming and devouring anything in sight like the animal that it is - lacking feelings and consideration for anything with soul and aesthetics. If one sees the war as an animal without cognition for its destructive tendencies, then one will not be short of words to describe people engaged in wars more as worse animals than real animals.
A boy is rushed into a clinic in Ghouta after the roof of the house he lives with his parents has caved in after a bomb attack. The clinic is rented with cries of parents whose children have become victims of senseless attacks and a a doctor, Amani Balour, a white nurse uniform and a black head cover reports to one of the the dying children's mother "We don't know what to do for him,"  meaning that as a doctor she is helpless about what to do to save the lives of those kids.
"For about three days now, there has been a savage campaign that is destroying Ghouta," the doctor said, and added, "They are using weapons of all types, war planes, rockets and explosive barrels." In one home, a kid said their home has just be hit by air strike. Another kid said "Save Ghouta.'
Mother of one of the kids in the clinic said she was waiting for her son to die and explained that she was making bread for him, when the roof suddenly fell in, and concluded that there is at least food in heaven. She caved in amid sobs and the doctor joined in crying and helplessly fell on her kneels, her hands covering her face, amid mental and emotional wreck.
When the animals in Syria, who call themselves leaders in government and leaders in the opposition began their disagreement with leaders in government insisting on the animal in power to continue his leadership of the devastated country and other animals said that they wanted democracy, none of the animals knew that they were putting Syria on a road to perdition.Once a beautiful country, Syria has been reduced to what no true human citizens of that country will not want or wish for that country, with the war moving from city to city with destruction of humans and and heir homes.
The BBC calls its tape "The cost of five days of relentless air strikes for children in Eastern Ghouta," being the turn of children and other residents of Eastern Ghouta to see the red animal called war, just as many parts of Syria have seen the destruction that comes with war. But Ghouta seems to have seen worse times than other parts of Syria, because it is the rebels stronghold.
Comment Box is loading comments...
NEWS AND FEATURES
News & Features Around The World