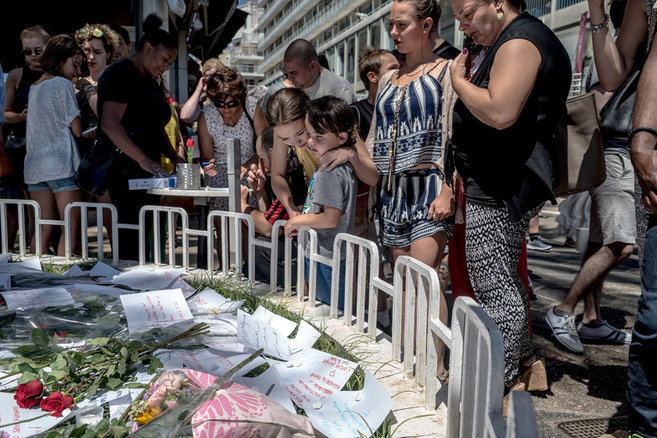 People gather to mourn victims of latest Paris terror attack (Courtesy:NYTimes.com)
Paris is a beautiful city, any people who know the city have said. They say it is part of the submission to the city's attractions that has led to the saying about seeing the city and dying. 'See Paris and Die" is undoubtedly a famed cliche, visitors believe best describe the city's beauty.
And people are saying that it is not in fulfilment of this statement that terrorists have laid siege on the city, but in defiance of the freedom that Paris offers.
The first attack on the city was an attack on freedom with an editor of a newspaper house and some of his reporters killed for Charlie Hebdo's daring to publish a cartoon about a Prophet Muhammed, who died several years ago. Since after the attack on Charlie Hebdo, Paris has witnessed two additional fatal attacks.
The most recent attack on Friday in Nice that claimed 84 innocent souls at the celebration of freedom remembrance of the freedom of prisoners at the Bastille, one of the important historical in the French Revolution. This has made observers to ponder and say that because these terrorists cannot kill freedom, they have chosen to killing freedom loving people. It is freedom that has made Paris to open its doors to all freedom loving people to make Paris their home without discrimination against religion.
The freedom and lack of discrimination based on religion has made Paris a melting pot for people of all races and religion and the cause of the current insecurity in the city. When the terror attack occurred on Friday, observers with hindsight quickly said it was terror attack and that it could not have been none other than Islamic terror attack, while in some cases newspaper reporters and some government officials waited for terror organization to claim the attack before ascribing the attack to terror.
Some news reports actually said that Donald Trump, the winner of the Republican Party's presidential primary election, had said something about the attack as a terror attack, without waiting for the confirmation about whether the attack was terror or otherwise. Soon, President Barack Obama confirmed that the attack was indeed terror attack. Though, news reports still said that no terror organization had claimed responsibility.
Later, the Islamic State said it was the one that influenced the attack and described the attacker as a soldier of the Islamic State.Yet, the New York Times reported as follows: "Mr. Lahouaiej Bouhlel had a petty criminal record but left no record of allegiance to any extremist group." This has almost been the case in all terror reports, when news reporters tend to wait for a terror organization to claim responsibility before linking a terror act to terror. Would anyone who want to commit terror or crime normally leave traces or links for him or her to be identified with terror before the act?
This tendency can be excused in a situation, where the existence of Islamic terror has been established and news reporters choose to wait, whether a terror act can be traced to Islamic terror. Of course, any act of wanton destruction of lives and properties can be described as terror, though the dictionary definition of terror says, "Terrorism is the unlawful use of force and violence against persons or property to intimidate or coerce a government, the civilian population, or any segment thereof, in furtherance of political or social objectives."
Credit must surely be given to Trump for his quick link of the Paris attack to terror and saying that it is an unconventional warfare, where we don't know who our enemies are because they wear no uniform for us to be able  to identify them among us. But since we know that the attackers claim to be Moslems, it is desirable that they be called Islamic Terrorists. Ever before the emergence of Islamic terrorism, Toni Morrison had written in "The Bluest Eyes" that one of his subjects about misanthropy in the book had believed as a young boy that to name an evil was to neutralize if not annihilate it.
Many people believe that until world leaders are able to properly confront this evil that is aiming to kill all freedom loving people like Trump has dared, beyond mastering delivery of condolence messages any time we are killed, this problem may never go away.  The terrorists are already turning Paris areas in the civilized world into a shadow that scares like Dick Gregory wrote in "The Shadow That Scares Me". It is left to the leaders in the civilized world to rise to the challenge posed by terror, before the fear that has become so thick about terror attacks becomes capable of scaring people away from this part of the world.
The fear that terror attacks have created in the mind of people is not new as being suggested in some reports. The fear of terror has been growing from the beginning of terror attack on the World Trade Center and with the latest attacks in Nice in Paris and Orlando in the the United States, and others in Istanbul and Iraq, some observers are saying that it seems that the armageddon is here and unless those in the fortress of government houses, no one outside on the street can claim to be safe.
These terrorists may not be able to affect the beauty and the freedom around us, but our lives matter too, and we should not be made to be professional undertakers of crying and burying the dead from terror attacks without solution to the problem other than responding with attacks that are not solving the problem. Isn't it time for us to to become thinkers and proactive and accept suggestions, no matter how politically unsavory, toward resolving whatever problem that may have cuased this unconventional warfare?

.
NEWS AND FEATURES
News & Features Around The World