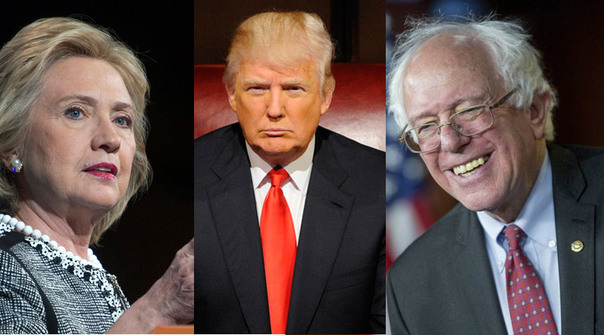 Hillary Clinton, Donald Trump and Bernie Sanders
The political party primaries in the United States begin on Monday in the battleground state of Iowa. The question among observers is about why the demand for change and the need to ostracize Washington insiders from the White House so strong.
If President Barack Obama has ushered in a change as desired by Americans eight years ago, would there have been a new demand for change eight years later?
This is the question people are asking, as voters in the Iowa and New Hampshire prepare to vote in the early battleground states, amid a demand for change greater that eight years ago.
​     Does it mean that President Obama has not achieved his desired change or that his drive for a change has been swallowed by mysterious circumstances?
Obama's apologists often say that the Republican Party in the Congress are his nemesis. They say that the Republicans don't like Obama, because he is a black president. But Obama's critics say that he had a Democratic Party Congress, which the voters threw out and voted for a Republican Party Congress. They ask about what may have happened to Obama's change mantra?
When Obama emerged eight years ago, he was relatively unknown, but already a junior senator in Washington. He was new like an untouched penny. The liberal newspapers urged him to run to bring newness to Washington - adjudged morally bankrupt. And when the duel between Obama and Hillary Clinton in the early battleground states reached a momentum, and Clinton seemed to have had an edge, Oprah Winfrey joined Obama on the campaign trail to give his campaign strength and stopped the slump caused by  Clinton -seen as a professional politician.
And so the new comer trounced the older hand. Suddenly, eight years later, Americans say they are fed up with anything Washington, and that they would prefer someone who has no Washington's identity as a president, and the push is being propelled by an organization called Citizens United or that the Citizens United has seized upon the reality of feelings among a large number of Americans to give itself an identity, and to be seen as achieving a political objective. Does it mean that because Americans seek a change that Obama has failed at bringing in a change?
Recently, Obama said in an interview that Washington has been polarized during his presidency more than ever before and that he hopes that Washington insiders will work to effect a change and recommended an old hand he defeated eight years ago as the most experienced. Whose fault is it that has made Washington polarized than any other other in history? The pendulum swings between Obama's White House and the Congress. The White House and the Congress cannot agree on immigration; they cannot agree on health insurance,  they cannot agree on how to prosecute the war against terrorism and keep the homeland safe and they virtually cannot agree on anything. When the Congress passes a bill, the president is waiting to veto it.
Executive order comes into the fray, as if Americans have been unaware of its existence before now. Some observers have accused the president of being too far to the left, short of calling him a Socialist, against Bill Clinton's assertion that he was able to perform as a president, because he came to the center and listened to both the Democrats and the Republicans. And people have asked about why Obama is so far to the left. No answer other than that the Republicans don't like him! Why? They say because he is black and they don't want a black president.
Will Americans voters ever achieve the change they are seeking against the Washington insiders, given the politicking and the horse trade and the political correctness desired from presidential candidates? Observers say that Obama may have failed to bring a change because of his inability to flow with the current in Washington, though he said so much to convince AMERICANS before and after his election that desired change was on the way. Astounding that eight years later, the change is still on the way and yet to arrive.
Hillary Clinton is described as a Washington insider. She lost the contention to Obama, regarded as now eight years ago. She is back seeking the mantle against Bernie Sanders, relatively new but has also been part of Washington.In the Republican Party, Donald Trump holds the ace, but he has dug himself into a hole for lack of political correctness, and his party is worried about how he has alienated himself from various voting blocs. If he wins the Republican Party's primary, he would face either Clinton or Sanders in the general election.
Trump is even newer than Obama as a candidate. He has never been in Washington, unlike Clinton and Sanders. Sanders has additional baggage of having been Socialist bent politician. The only job the Republican Party and Trump would have to do, if Trump becomes the party's nominee, is how to get Trump of the hole, which the lack of the sense of how to cajole different voting blocs to get the votes has caused him. This will require a down to earth and tough Public Relations strategy.
Of course, if Americans really want something new, they have no choice among all the contenders that Trump is the only new and the one without the Washington identity. But Trump would have to convince voters that he would not deport everyone who are not white Americans. Other than this, Americans will be stuck with the Washington insiders that they no longer want to see in the White House, and they would have to wait for another opportunity in the future to seek a change they so much desire to stop Washington insiders playing politics with their lives..
NEWS AND FEATURES
News & Features Around The World