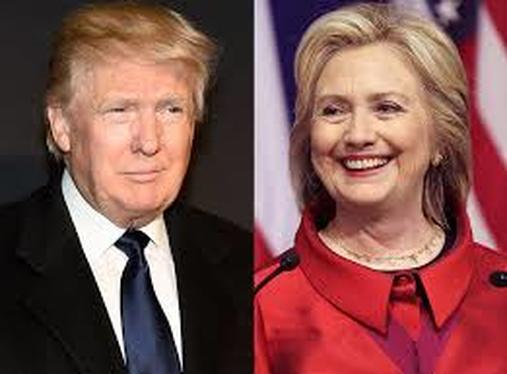 Donald trump and Hillary Clinton (Courtesy: thecommonsenseshow.com)
The two contenders, Hillary Clinton and Donald trump, for the November presidential election in the United States, take a step further tonight in their bid to convince the voters, about their suitability for the office of the president.
But many observers, unlike the major liberal newspapers, are asking whether there is a big deal about debates, which to them have become part of the election cycles in the country's presidential election  tradition.
​   The liberal newspapers have always looked at every opportunity as a time to shore up their preferred candidate and so there is nothing different about all the endorsements and their effort to tear apart a candidate's campaign for the sake of scoring points for their own candidate.
​   Why cannot these newspapers wait, allow the public to see the debate and let the public evaluate the candidates based on the outcome of  the debate?
Is there anything that the big newspapers fear that they think that they have to pass their judgment before the debate to avoid total collapse of their candidate's campaign? Don't they know that they are doing more harm to their candidate than good for their rushing into judgment before the debate? And that by passing quicker judgment, they seem to be questioning the public's ability to discern what is good from what is not?
Americans, who are not privileged to be in the debate hall at Hofstra University in Hempstead, New York, will tune to various television stations and other sources, since the Facebook and the twitter have expressed intentions to stream the debate live, to watch the two contenders and the role of the media will be to report whatever happens at the debate, and it is one reason there is no need to preempt the debate's result. Already, the two contenders are reported neck to neck in the polls against the result of polls weeks ago, after the Democratic Party's convention, where events were tailored to win the election before the election itself.
Clinton has moved downward or has stagnated in the polls, while Trump has seen gains against media's  orchestrated opposition to his candidacy. Trump has moved against a mountain like opposition to contend fiercely with the liberal media's favorite, from about 12 or 15 points down in the national polls and sometimes in the states too, and enough to threaten Clinton's relevance as a candidate. It certainly cannot be that these polls' results are wrong or cooked or that it is Trump that is releasing the numbers.
Suddenly, Clinton has become like a product in need of so much advertisements to convince the public to its usefulness against public's perception. Let us wait and see whatever happens at the debate, observers are saying. or the newspapers do so much damage to their own relevance worse than the internet has already done, which many people say has rendered the newspapers almost useless as source of information for the public.
This just one of the debates before the election. There are two or more on the way for the presidential candidates and their running mates. 44 days still far away to decide the election, and voters will rely on all they have seen and not what they are being told parties in the ideological warfare.
NEWS AND FEATURES
News & Features Around The World