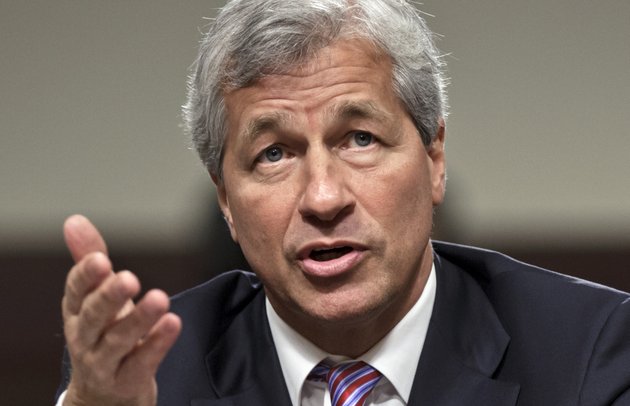 Jamie Damion of Chase Bank
Have you heard the news about what the chief executive officer of Chase Bank, Jamie Damion, said about Washington?
It is like a reminder of Americans' hate for Washington, for lack of performance or what looks like and why the Republicans voted for an outsider in the party's primaries.
"It's almost an embarrassment being an American citizen traveling around the world and listening to the stupid s--- we have to deal with in this country," Since the Great Recession, which is now 8 years old, we've been growing at 1.5 to 2 percent in spite of stupidity and political gridlock, because the American business sector is powerful and strong. What I'm saying is it would be much stronger growth had we made intelligent decisions and were there not gridlock."
According to news reports, the executive of the U.S. banking giant cited travels to countries such as France, Argentina, Israel and Ireland and said the U.S. has become "one of the most bureaucratic, confusing, litigious societies on the planet and the situation is hurtful to the average American, because it prevents foisting of right right policies.
Let us take a look at the last seven months of political gridlock and confusion. The aftermath of the elections have produced a winner, the winner's rebels and the confusion amid a silent war, being waged against the winner by rebels.
The rebels have said that they are determined to upstage the winner, because they suspect that the Russians may have helped him win the elections. The rebels have vowed to ensure that the winner does not make any progress. It is like the rebels believe inviolably that the major reason they have been voted into office is to mount iron clad opposition against the winner over the Russians' alleged infraction.
These politicians have forgotten that there are voters, who have sent them Washington to protect their interest, and that ensuring that no foreign power interferes with the country's election is just one of the many voters' interests they have to protect. But everyone can see that they seem to have abandoned voters other interests in favor of just one interest.
Consequent to all round war against the president over the Russian's alleged interference in the elections, despite all effort by the president and his men to move the country forward in the economic sphere, everything seem stalled in the economic front.  The public hears about policies to be formulated and the reasons executive action are taken, but it seems attention by officers in the executive branch are caught up with given attention to issues arising from almost everyday Russian debacle.
It is what the rebels have vowed to achieve, ensuring that the executive branch makes no progress. Yet, Americans have not voted to create a winner and rebels situation. There has been no incontrovertible prove of Russians's interference in the election, beyond one single fact that is known to the public, that an unknown Russian entity hacked the Democratic Party's computers and it made information from the hacking available to Wikileaks for publication, and most of the media houses that are rebelling against the winner have copied or lifted most of the Wikileaks published information.
The political situation is making many people to ask whether it is ethically permissible, for media houses to join political rebels in the fight against an election winner, on an issue that no fact has been established. The evil that haunts Washington and Washington political elites has not disappeared seven months after the voters in the Republican Party and the battleground states turned their backs on them.
And the Washington political elites are the cause, because the liberals among them, who have lost the elections, have chosen to create non-existing political war against the winner, using the a loud section of the media  as instruments of attrition against their enemy. The liberal and their media are waging war against the executive's office and the Conservatives and their media are concentrating on ensuring the liberals and their media don't do damage to the executive.
The consequence is upon America as a nation, for the gridlock that is preventing needed economic progress to the nation, and against the silent voters, who are supposed to be benefiting from economic progress, but are groaning under a stalled economic standstill.