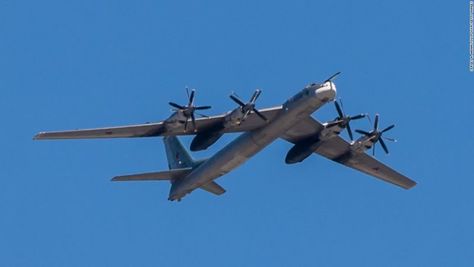 One of the Russian bomber spotted off Alaskan Coast
The spotting of  Russian bombers in the Alaskan coastal area, reported in the news on Thursday does not border Americans, least the leaders in Washington.
Unlike the way that the presence of an American war ship in the Korean Peninsula has made Kim Jong-un and his senior officials become paranoia.
"Is Russia coming to bomb us?" one K9 security personnel said, in response to a question about the news of the sighting of Russian bombers in Alaska. "No, that does not matter. They just meddling with us," he said on a final note.
Another New Yorker, who seeks anonymity said that the Russians want to scare Americans, but that they cannot, in comparison to how scary Jong-un and officials have become since the appearance of the American warship at its back yard. The country immediately launched a missile, which it said America did want it to launch. but the launching failed and there were reports that America may have used better tech-know how to render North korea's missile launch useless. Simultaneously, North korea said it will henceforth launch missiles on weekly basis and that it was ready for battle with America.
Not done yet, the country staged an elaborate ceremony showcasing its armament and a video showing the launch of a missile that hit America's mainland! Many people are saying it is possible that Jong-un has a date with evil and he seeking to be hanged and a question about why he is acting with provocation over demand that North Korea needs to limit the drive for nuclear acquisition, endless and elaborate launching of the dirty products.
Not a single word of provocation has come out of Washington against the Russians over the Russian bombers reportedly sighted, 41 miles off Alaska's coast. Some of the Russian bombers were sighted on Monday too, and that prompted news reporters to ask whether the one saw on Tuesday were the same one that were seen on Tuesday.
This development  has shown a big difference between a powerful country that does not make noise about its power and another that is not so powerful, but makes so much noise and losing relevance in the process.
NEWS AND FEATURES
News & Features Around The World