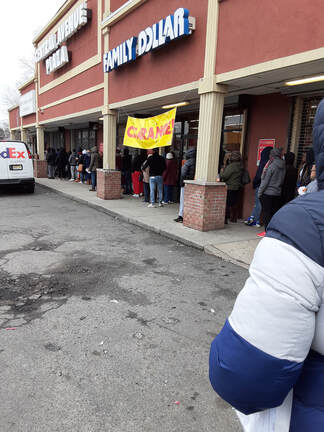 Customers queue in the cold at the Motor vehicle Division on Central Avenue, East Orange, New Jersey.
​    The ferry service from Harborside in New Jersey to Downtown New York, resumed first Saturday in February after one month of weekend service in January. The Path runs only on public holiday weekends. It is possible the Path will run again on President's day weekend next week.
​    Many straphangers don't like the weekend service of traveling on the ferry and queuing in the cold to do that. But it is compulsory for the old man to travel to the city on daily basis like others who work in Downtown New York and live in New jersey.
The moment the week drags close to Saturday morning, the old man begins to think about how to skip the ferry and begins to make alternative travel plans. Notwithstanding the ferry station is close to the old man's office. His last ride on the Path train before the Path clams down its service on Friday night is early evening. And from the moment he steps out of the train at the World Trade Center, WTC, he begins to think about the ferry.
The thought marked how he began his first weekend in February. First, he remembered how Path had been gracious by allowing the train to run all weekends in January. He wished that the wonder of the Path train running on weekends could continue into February and becomes endless on all weekends. But that wonder belongs to Path authority to make and keep.
Working all night, the old man thought about the Path train and the possibility that it could run first Saturday morning  in February and save him the ordeal of riding the ferry. Not just the ordeal of riding the ferry, but the ordeal of having to get on that long queue in the cold waiting for the ferry's arrival from Harborside included.
He realizes that the ferry is actually not what he has phobia for, but standing in the muggy cold waiting for the ferry. He had lived in a temperate region before arriving the United States at an age near his 50th birthday. There was nothing wrong that he chose to live in New York. Choosing to live and work in the Tri-State also means living with the scratching cold for three or four months of the Winter season. He does not like the cold for anything just like millions of people in that part of the U.S,  who have all chosen to live and work in the city for the love of the dollar. And he hears people saying it all the time that one never gets used to the resilient cold-weather. He has asked some people born in the city about whether they love and used to the cold. Majority of respondent have told him no one gets used to the cold and that everyone is adapting to live and work in the cold. It is why people keep are mostly indoor during the winter. People only go out because they need to go to work. It is why people are hardly on the streets in winter in comparison to the Fall and the Summer.
And suddenly, the Path announced it would be ending its service to the city on Friday night and passengers would have to be get into the ferry from the Harborside every Saturday and Sunday to get to New York from New Jersey and from NEW Jersey to New York. The announcement says the change in weekend service is to enable the Path complete work on damages caused by Hurricane Sandy.
If it is just a matter of stepping out of the train and walking a short distance to the Harborside where the ferry station is located, it would not matter. But it matters because the distance to walk is not a little exercise for people. And after the walk, you get on a  queue in the cold to wait for the ferry. Last week, when the old man went for the renewal of his expired driver's license, he found the Motor Vehicle department's customers queuing in the cold at the Central Avenue office division's office in East Orange. He thought the Motor Vehicle may have got the idea from the Path Train - to make people queue the cold.
To skip queuing in the cold on Saturdays, the old man has devised a diversion of his journey to the number one train in the city and gets off at the Christopher Street station, walk to the Path train coming from 33rd Street in the city and rides to his stop in New Jersey, instead of going to queue in the cold waiting for the ferry in Downtown. Once in the morning on a Sunday, he rode the Path from Jersey City to Christopher Street and found the number one train did not run. He spent additional not budgeted $6.00 to get to work. He thought spending the amount was a fair deal to avoid queuing in the cold to catch the ferry.
The only time he believes that circumstance forces him to queue in the cold waiting for the ferry is Saturday evenings because he has to go to work, and he does not have enough time to make the journey into the city through Christopher Street to connects any train going Downtown or through Downtown, to skip queuing in the cold. When did the authorities in this part of the world think it is wise  to make people queue in the cold?