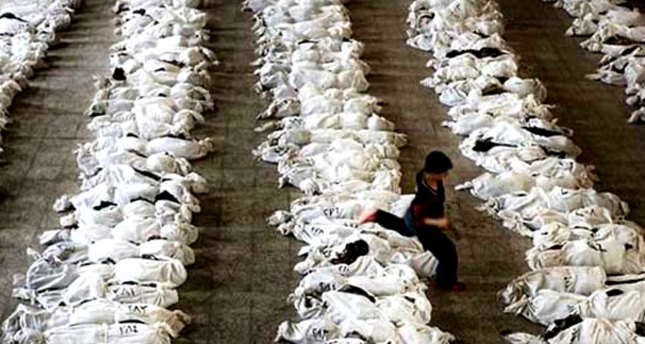 Unidentified running through almost uncountable bodies wrapped in white clothes (Courtesy: www.daily sabah.com))
All the roads in New York are seemingly leading to Hofstra University in Hempstead, New York, for the debate between Donald Trump and Hillary Clinton, this moment.
This leads to a question about whether the debate between the two contenders is more important than the war in Syria, where human lives are at being lost at such monumental level, that calls the argument between warring powers about who has killed who, to question.
Or is the debate in New York more important than the change in weather, which puts many lives at risk, year upon years, in the United States?
How important any of these issues may be will depend on the individual's perception. For me, the debate in New York occupies my mind than the war in Syria and the weather. But the weather holds the ace for my son, Emmanuel, who has barely lived in the U.S for five months.
"Daddy, when will it soon begin to snow?" he asked. "It may begin to snow anytime from October, but it usually begins late in November or December." Truly, the weather has begun to change. It is now cold through the night into the morning hours and the cold is staying longer into the day.
As we discuss the weather, stories about Syria, the argument over who killed the syrians and who may have committed war crimes flared into my attention and I thought a much more serious issue about life and death in over there in Syria. On a second thought, I felt that may be regarded as an international issue, since local news holds the ace in every locality.
But for how long will the Syrians face continuous death without solution in sight? And that question rekindles the importance of the American presidential election and that whoever wins the election will have a hell of work to do to stop the carnage in Syria. The carnage in Syria has to be stopped and the uncertainty of life for Syrians, which has made them to become sheeps without a shepherd and are at the mercy of the powerful countries as Refugees must stop. No place can be like home, but when fire guts one's home, one will have no choice than seek help, wherever it is available.
The same that is applicable to people in a war torn country is applicable to people who faces dangers from mother nature in Hurricane season. People around the North East and other areas that are paths to Hurricanes' landing are already getting ready for the battles ahead. Although, Hurricanes come with warnings, unlike the wars that are often fought with little warnings for people to get out of the way and one that does not kill the sensible lame. But the loss of lives is what matters and that makes both types of wars evil and unacceptable.
Too much carnage in syria. Not good for humanity. The world witnessed same type of carnage in Libya and Africans don't seem to like the outcome. of the involvement of powerful countries with the killing of the country's strongman and opening of the country to more killings and making the ISIS turn the place to a killing ground and many countries in the continent under the threat of the ISIS's inglorious mayhem. .
NEWS AND FEATURES
News & Features Around The World