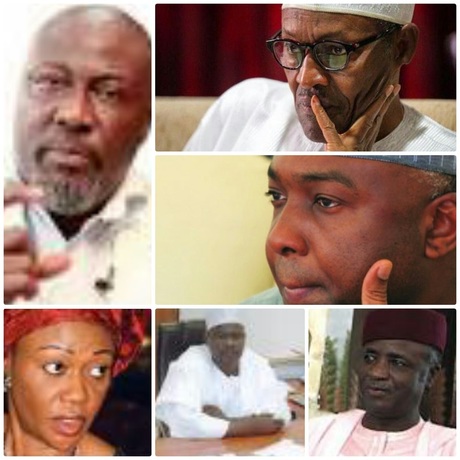 Melaye, Buhari,Saraki and Tinubu
“It was the timely intervention of a number of my colleagues which prevented Senator Melaye from unleashing physical attack on me. However, as the leadership of the Senate did not call him to order (sic) in the circumstance, he proceeded to threaten my life without any provocation whatsoever."
These are parts of the words of Senator Oluremi Tinubu, a Nigerian senator and wife to one of the national leaders of the ruling party, the All progressive Congress, in a letter top the Inspector General of Police, for protection against Senator Dino Melaye, who she said recently threatened her on the senate floor.
Whatever the disagreement between Senator Tinubu and Senator Melaye, which has blown in proportion to its present discordant level is not hidden. Senator Tinubu said in her letter that she was saved by the timely intervention of some of her colleagues, which prevented Melaye from physically attacking her and that as the senate leadership did not call him to order, Melaye proceeded to threaten her life.
Where is the senate leadership that Senator Tinubu has made a reference here? Is it not the same senate leadership currently being torn apart by powers seeking pounds of flesh over the sharing of political offices? Would Senator Tinubu say she lacks the knowledge of the trouble that has gripped the senate over the issue of the question about who has the power to nominate senate leaders and the fallout of the emergence of the current leadership in the senate and that whatsoever that Melaye represents against her is apart of the trouble over the senate leadership problem, which her husband's names, Bola Tinubu, have featured more than that of any other living Nigerian politician?
Senator Tinubu knows that Senator Melaye does not belong to the same camp with her and her husband over the travail of the senate president, Bukola Saraki, currently being tried for corruption by the Nigerian government and the later trial for the forgery of standing rule, which the government said was forged and that it was the act that paved the way for the emergence of Saraki and his deputy as senate president and vice president respectively. Is there no fire that has caused this smoke that Senator Tinubu is complaining about? Is Senator Tinubu not part of the feud in the senate and has she chosen to talk as if she does not know about the trouble in the senate?
If she knows that there is a fire between the camp that she belongs and the camp that Melaye belongs, why does she seems to talk as if she does not know the problem in the senate? Senator Melaye has not spoken like someone who lacks the knowledge of the infighting in the senate over Saraki's tarvail and that a particular powerful godfather is the cause of his travial and that a large number of senators, if not the majority, are said to be in support of Saraki. Nigerians expect their elected representatives to be truthful. Senator Tinubu not only represents the people of Lagos in the senate, she is first her husband's figure in the senate.
It will be understandable if Senator Tinubu has said that she is a victim of the power play between her husband and the senate leadership. Senator Melaye had said that Tinubu cannot play the role of God in his life and that Tinubu cannot decide his fate, a reference to what is currently happening in the senate to Saraki that their own party's national leader is the one pulling the strings behind the scene and that Saraki's travails have nothing to do with genuine intention to maintain the rule of law or genuinely fight corruption. Words came out just this week about a plan by the senate aimed at impeaching President Muhammad Buhari as part of the imbroglio between the senate leadership, the executive and the powerful caucus that helped in the president's election.
Many Nigerians are talking secretly that these politicians are again on the road to truncate the country's democracy on the altar of self interest, personal aggrandizement and blind display of power. They said it happened in the first Republic between Obafemi Awolowo and Ladoke Akintola and that it also happened in the second Republic between Moshood Abiola and Umaru Dikko. The same, they say, is repeating itself, between Saraki and Tinubu.
Many Nigerians who know say the Awolowo and Akintola imbroglio killed the First Republic and that the imbroglio between Abiola and Dikko partly led to the death of the Second Republic. They are wondering about what becomes the fate of the current democracy in the country, when leaders of the ruling party cannot maintain peace, allowing dangerous infighting among themselves for the sake of who wields power, using the rule of law and the fight against corruption as smokescreen to turn the fire against themselves, while the interest of voters suffer.
NEWS AND FEATURES
News & Features Around The World