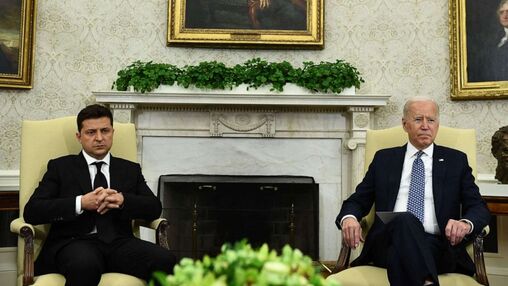 Zelenskyy and Biden
It began as a movie. Intelligence shows Russian soldiers massing around Ukraine. No denial. Russian soldiers were on the border with Ukraine for a planned invasion. The world watched and waited in awe whether the war was in the making. The Olympics came into the picture. As soon as the friendly competitive games ended in China, the shooting war in Ukraine began with the sounds of musketry, artillery, and bombing.
Still like a movie but now a reality. Poland wants some jets transferred to Ukraine to fortify defense against Russia. Poland enjoyed the jets transferred via the American base in Germany. The Polish government's announcement caught American officials unaware. America will have nothing to do with such a transfer because it has no intention to cause Third World War III. America dispatched Vice president Kamala Harris to Warsaw to quickly explain the Yankees' position.
Harris was caught on camera laughing aloud during a sad or what should be a serious session. Ukraine has suffered from Russia's firepower, with civilians caught between musketry and artillery. America's position of non-interference has led to questions about the rationale of standing aloof or whether it is rational for President Joseph Biden to do anything that will trigger World War III.
Some analysts support Biden's position, and others are not. The political divide in the country plays a role in analysts' positions based on political ideology. It is true Americans are war-weary still the reported bombing of maternity, among other atrocities by Russians, offer a reason many people are urging America to save Ukraine. But Washington has chosen to provide additional means of support to Ukraine and not anything that will lead to NATO's involvement.
People are saying this war should not have started in the first place. But for the failure of diplomacy from the beginning to this moment. If NATO countries would stand akimbo to avoid World War, then NATO should have made efforts to stop the war than standing on the side of Ukraine and urging the country into war with Russia. Don't they know that Ukraine lacks the military power to engage a country like Russia?
President Zelenskyy has said he no longer needs NATO membership amid the rubbish and the fiery position he suddenly finds himself with calls to NATO countries for help unheeded. Zelenskyy is slowly finding his feet in Saddam Hussein's shoes. Hussein told the world Iraq would defeat America in a desert war forgetting Iraq lacked the power. Observers are asking about Zelenskyy's fate now that Russians are reportedly surrounding Kyiv?
America undoubtedly has intelligence which politicians in Washington trust more than Americans in other walks of life. Remember the failed intelligence over weapons of mass destruction non-existent in Iraq. Iraq's fate was destruction, and Hussein's life ended on the gallows. Many Americans are watching the current debate over research laboratories in Ukraine, which the American government has denied their existence.
Britain said it had embargoed the movement of Russian dark money in the country arising from the Ukraine spectacle. So is dark money permissible to circulate in peacetime regardless of its consequence and that if Russians play safe, their dark money would be allowed to spread unchecked? No wonder African leaders have their ill-gotten wealth all over Europe.
Biden pulled the plug on Russian oil two weeks into the Ukrainian debacle after criticisms he helped fund Vladimir Putin's war in Ukraine. Does it mean without the overt criticism, his administration would have continued buying Putin's oil and still pushing Zelenskyy to remain in the war while watching Ukrainians dying?
Biden's resort to saying that Putin is the cause of the high price of oil at the pump in the United States after pulling the plug on the importation of Russia's oil is nothing but absurd. Biden needs to look at his track record from the beginning and admit his failure as a president.
Comment Box is loading comments...
NEWS AND FEATURES
News & Features Around The World